eBay Getting Serious about Travel

A German company has developed a working sales and reservation platform to sell travel on eBay. Market is rapidly growing. 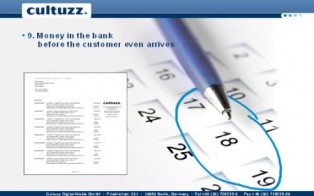 With over 250 million registered users and a trading volume of more than USD 60 billion per year, eBay is still the largest marketplace in the world. And while eBay was previously only of limited suitability for the sale of holidays or hotel stays because the system lacked a booking facility, now German based Cultuzz Digital Media has finetuned its proprietary checkout solution and integrated it into the eBay purchase procedure.
This not only enables users to buy a voucher for the offers listed but also to carry out bookings at the same time. And… . eBay has become a full-scale booking platform for travel services.

Cultuzz has been working on this solution for almost 4 years and when the system was introduced back in 2006, there were quite some angry users, essentially because the communication between buyer and selected property was not yet arranged into the perfection it requires in this industry.
But thanks to the new checkout solution from Cultuzz, the online sale of travel offers via eBay is increasing in importance.

Cultuzz has so far sold some 750’000 hotel accommodation packages on 20 eBay markets worldwide for its hotel customers. Cultuzz is now one of only eleven suppliers in the world to have been granted the right by eBay to adapt the eBay checkout process to its own requirements. Within the travel categories, Cultuzz is the only provider worldwide able to display the current availabilities of a listing and enable direct booking from the hotel’s inventory after the purchase. And that truly is a break trough.

More eBay from this side of the Pond

On other eBay news, Cape Canaveral resident Michael Steadman advises eBay buyers not to leave feedbacks anymore, considering that he just spend $7,000 in court trying to defend himself against a Miami Beach laywer, who sold him an item on eBay a while back that turned out not to be in line with the description. After Steadman got his money back from Paypal, he shipped the item back to the seller and decided to leave a feedback that reflected the bad taste in his mouth from the transaction: “Bad Seller, he has the ethics of a used car salesman”, he wrote.

Now being married to a woman who has spent more than 3,000 positive feedbacks in time on eBay, I occasionally hear exclamations coming from her room that rhyme with witch and flagpole, and I know there is a potential feedback or dispute issue in the works.

Michael Steadman had not violated any of eBay’s rules of conduct with his feedback, but he was unpleasantly surprised when a while later a process server presented him with a court summons from eBayer emiller1313, who turned out to be a Miami Beach lawyer with the name of Elliot Miller, claiming damages for ruining his 100 percent customer approval status and felt his customer reputation had been dealt a severe blow.
Personally I find it irresponsible to abuse the court system with claims like this, but hey this is America, the most litigious country in the Universe and no doubt that are lots of open slots on the court’s agendas in Miami. Steadman, who should have just let it run instead paid $7,000 to his attorney to fight the claim over the past 2 years and now has to stop because he ran out of money. Seems to me the only one who made money was Steadman’s attorney.

Am I going nuts or is there something inherently wrong with this whole picture.
I couldn’t help but had to check emiller1313 out for myself on eBay and was surprised to find only 5 items listed this week at $0.99 each (no bids), with a total of 330 feedback and a positive rating of 98.8% . eBay’er emailler1313 seems to be an OK seller but I know from my wife that a 98.8% rating requires more than one person leaving a negative feedback. Wonder how many court cases Elliott has running? I also wonder if Mr. Miller knows that negative feedback come off after a while, which would bring his reputation back to stellar?