As the first bed and breakfast opens in a location, tourism starts its unstoppable process to expansion. Only careful planning can define the limits. 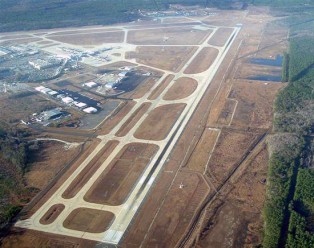 Large resorts have their attractions and fulfill an important role in the development of tourism destinations. It takes numbers to attract numbers and the chicken and the egg dilemma of airplane seats versus beds available is of utmost financial importance to any tourism destination, especially islands.

When I landed on St.Thomas in the US Virgin Islands in 1986 I carried a large backpack full of big resort marketing and development experiences with me from the Canary Islands and Mediterranean Islands, to the French Riviera and Dutch Marinas, but I had none of the experience needed to market small hotels, bed and breakfasts and guest houses.

Since I had planned to settle in the Caribbean for a while to pursue my passion of blue water sailing I had no interest staying in large and expensive resorts. My plan was to check out the various marinas and dry docks in the US and British Virgins for a suitable 40ft sailboat that would be comfortable and fast enough for a couple of years of cruising the islands.

So my guess was to go local and I landed in a Small Inn in the hillside of Charlotte Amalie, the capital of St.Thomas, called the Danish Chalet. Except for the danish that accompanied the cinnamon coffee in the morning, there was nothing Danish about the place, were it not that the US Virgins had been Danish until Uncle Sam decided it needed a sub base in the islands to protect the Panama Canal from German attacks in 1917 and bought them for $25 million from Denmark.
Some people in those early days tried to convince me that the Danes were the reason that traffic on these American islands move on the wrong side of the road, but since my roots are in Northern Europe, I just smiled and shook my head.

While boat searching, I stayed for about 3 months in the Danish Chalet and became real close with proprietors Frank and Mary, a retired couple from California, so close actually that when their daughter, who ran the election campaign for Bob Martinez for Governor of Florida in the fall of 1986, got married, they asked me to run the Chalet for several weeks for them. 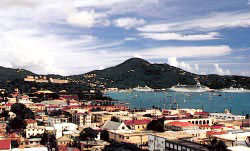 You quickly learn a lot when you go hands-on

Since they were part of several local and regional small inn associations and the St.Thomas hotel association I often ended up going to meetings where I met all the beach shacks of old, those mom-and-pop guesthouses and small inns teetering on wooden foundations at the edge of the Caribbean shore, offering the minimum in basics but the maximum in island flavor. I loved them and their colorful proprietors, but as soon as the mosquitoes heard that my body was free, an air conditioned room with private bathroom became the first concession to luxury. Over the years, influenced by personal desires and acquired tastes, free Internet, plush towels and an ocean view balcony with a chaise lounge have become pretty much a standard.
Unless trade winds blow straight into your window as they come in over the Atlantic Ocean at 15-20 knots and fall down a mountain side into your bedroom, hot humid nights are hell.

For happy hour I still seek out the funky tiki beach bars and the aging local bartenders who spin creole/english and pour local rum concoctions, but I want a lot more these days. And I’m not alone, and fortunately, upgraded properties are accommodating the sizeable number of travelers who, like me, seek a menu that reads like a la carte.  .
In the early years I sailed the entire Caribbean and saw many magnificent jewels of small hotels and guesthouses whimper away as the owners did not understand that with a little investment in in-room luxury, they would have been able to withstand any economic downturn, but what is cute and adorable the first year, like a couple of lizards in your room because the sliding glass balcony door does not completely close, becomes irritating the next year.

Small inns are not powerhouses in the tourism trade; they don’t have the numbers to impress and attract massive tourism, let alone airlift. But they can be the icing on the tourism cake if they understand how the system works. For a developing destination they are the places where the early adopter portion of travelers recognize a Jewel in the Making. Islands like St.Barth and Anguilla in the West Indies would never have had a chance to stay exclusive high end destinations for as long as they did, without the island of St.Martin and its major commercial development, cruise ship port and $120 million dollar airport nearby that accommodates daily direct fights from all over the world.

The daytrip distance between Anguilla, St.Barth and St.Martin makes the entire area an attraction that serves both high end resorts, exclusive guesthouses and B&B’s and a large number of Small Inns.

The same goes for the touristic make up of Amelia Island and the region, yet it has not been explored nor accommodated to any degree at all. If Jacksonville Beach functions as the regions mass tourism destination, Amelia Island to the north and Ponte Vedra to the South (even as far as St.Augustine) offer the varying degrees of high end destinations.

The expectations of vacationers have matured and from here on will be constantly changing. Once arrived at their destination, today’s guests want variety and even the small hotels can offer it in spades if they share their knowledge of the destination and collaborate with unique attractions and service providers locally and in a daytrip distance.

For small properties to charge high end and succeed they need to know their clients (demographics) and markets (geographics). They need to know their customer profile long before they check in. Guests at the Ritz Carlton and Amelia Island Plantation have minimal connection to the guests who book the family-run guesthouses and bed and breakfasts. But having said that, as a result of luxury amenities built into the accommodations of larger resorts, the small properties that survive the downturns in normal travel trends and the stalled economy, have to constantly put money into their product and back it up with marketing. Simply replacing the floral bedspreads no longer cuts it.
Everything from spas to private yoga classes to organic breakfast menu items, flat-screens, free Internet and iPod docks have become pretty much basic. Green Globe certification sometimes rates higher on a guest’s checklist than does a 500-thread-count bedsheet. But how do you know?

The Fight over Price Points

Moreover, as the larger resorts are still experiencing a decline in demand due to the loss of incentive/meeting business, some are still applying discount rates to capture the transient leisure guest and as a result, the smaller hotels now find themselves competing with the larger ones for the individual traveler at lower price points. To end this uphill battle, there is only one true solution and that is market volume expansion. More visitors from more destinations.

Amelia Island as a tourism destination is still a bit like the rich kid in 11th grade wondering whether to step into the family business when he finishes his studies or venture out in the world to create his own path. The island could go its separate way and ignore that there is an international airport 30 minutes away or it can go the route of market volume expansion and acknowledge the existence. It can use Northeast Florida for its destination promotion or it can isolate itself as an exclusive self sufficient haven. I have watched the island of St.Barth in 35 years turn from exclusive, high priced rich and famous destination to a gateway for upper middle class tourism. Another 10 years and it will be just like St.Maarten which currently sees more than 2 million visitors per year on a 37 square mile island where the total length of all beaches combined is less than half of the beach length we have to offer here on Amelia.

I have learned that it is the nature of the tourism beast. The only, absolutely only, way to keep some developmental integrity is a long term development plan for Amelia Island and Fernandina Beach, that includes all aspects of the inevitable change from a fisherman’s village with supporting industries to a full blown tourism destination with a regional impact and maximized carrying capacities.