With a perfect storm rocking the Southern California cruise sector, South Florida is looking at too many ships spoiling the pricing. 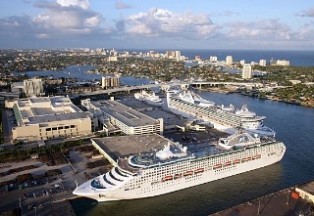 Too many ships in one harbour?

While a perfect storm has rocked the Southern California cruise sector, South Florida is looking at a scenario of too many cruise ships spoiling the market. As more and more cruiselines are repositioning their fleet closer to the Caribbean Cruise Ports of Call, Florida’s Port of Everglades is looking at potential traffic jams and price devaluations.

The economy, but especially the economy in California, has prompted a pullback of capacity in San Diego and Los Angeles cruise port, that has more than erased a decade of growth, say industry experts in that state.

With 12.2% unemployment in the state they claim that the 17 million people market they draw from (Los Angeles/San Diego) has lost its economic power to sustain a cruise ship industry at the 2008 levels.
Yet there must be more at work here than the economy alone, considering that Florida’s unemployment currently runs 12.1%   which a rapidly expanding cruise market, while

As more and more cruise ships sailing out of Port Everglades may create a problem for the owners, the abundance of berths will mean more choices aboard top-rated ships — and often at surprisingly low prices.
And more new ships are sailing in – from Holland America, Celebrity and Seabourn. This winter, there are scenarios depicting as many as three dozen ships, combined carrying 90,000 passengers at any given time.

That kind of offerings is driving prices down for cruisers.
Even on upscale lines, where prices sometimes fall below US$100 per person per day, double occupancy.
Cruising is considered affordable, experience expanding and safe. A quick survey after recent accidents such as an engine fire that disabled the Carnival Splendor show that neither prices nor demand are expected to be impacted. Most would-be cruisers think such problems are rare.

The Problem in California

Even though officials put the economy and unemployment at the center of the problem, other factors such as limited Port of Call appeal, coupled with the perceived problems in Mexican cruise ports, make it difficult to compete as a cruise embarkation point with the Caribbean and Europe.
As a consequence the area’s two main ports, Los Angeles and San Diego, are losing their ships.
It remains fact that the Caribbean, the Mediterranean and the Scandinavian and British Isles offer many more interesting ports of call than the Pacific coast of Southern California, the Baha and Mexican Riviera. It’s a people’s choice.

As a result San Diego’s cruise calls this year will be half what they were in 2010, which was already down 45% from 2009. Los Angeles will experience a five-year low in cruise passengers this year, to 605,000 from a peak of 1.2 million calls in 2008 (for a larger view, click on the chart).   Most damaging has been the elimination of the two year-round ships at those ports, the 2,052-passenger Carnival Elation from San Diego, and the 3,114-passenger Mariner of the Seas from Los Angeles.

The Elation sails the Caribbean this year from a variety of Homeports such as Miami, Charleston and New Orleans with such great deals starting at $249 p/p double occupancy for a 5 day Eastern Caribbean Sail! The mammoth Mariner of the Seas has been relocated as well to service Caribbean, South America and the Mediterranean. There is just that much more to see and do, even though Souther California boosts blessed year-round sunshine, good airlift and a population of 17 million in the Greater Los Angeles and San Diego areas combined. Yes, it still is home to several of the nation’s wealthiest ZIP codes and a cruise line’s potentially ideal demographic mix of retirees and young families. There are plenty of pre- and post-cruise options, from visits to Hollywood, Disneyland and the San Diego Zoo to shopping on Beverly Hills’ Rodeo Drive and frolicking on Pacific coast beaches, yet the reasons for Southern California’s loss of cruise traffic are not a mystery.

The nation’s most populous state has arguably been one of the worst hit by the recent recession and is expected among the slowest to recover.   Newly inaugurated Governor Jerry Brown admitted last that he was inheriting a “financially beleaguered state,” and a report released in September by the UCLA’s Anderson School of Management predicted that California’s economic recovery would be “even slower than the rest of the country’s,” pointing to the state’s 12% unemployment rate, which is not likely to fall below 10% until late 2012.

But it is not only about the inability or unwillingness to pay a ticket price that allows the cruise companies to operate on an acceptable price level.
It is the attraction of the destination also and while the cruise lines record an 85% ‘take rate’ of excursions in Europe, the ‘take rates’ for shore excursions on cruises in North America is about 30%.  And that means substantial cash flow.

Adding to the woes are its geography and the rising cost of fuel.  West Coast cruise destinations have always been few and far between.  Cabo San Lucas, Mexico is the first port to the south at a 1,000 miles from Los Angeles and 800 miles from San Diego, and that is a long 32-40 hour haul for a ship cruising at 25 knots an hour. When fuel costs eat 25% of a cruise ships revenue, it’s time to move to a market that allows for better cruise pricing.

Royal Caribbean operated last year on a average 14% fuel cost versus revenue. If oil prices per barrel are expected to reach $100 plus for 2011,  it may rapidly become traffic hour congestion in the Port of Everglades at rock bottom prices. Maybe Jacksonville can pick up some of the slack.