End of the Christmas Season

It seems that everyone has a tradition of when to decorate for the holidays, but when do you take them down? 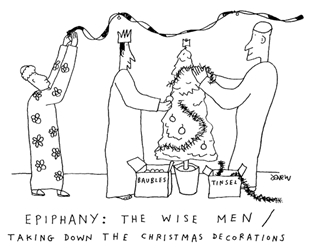 It seems that everyone has a tradition of when to decorate for the holidays and when to take down the decorations. It is a guarantee that you will start seeing Christmas lights lit up by the weekend after Thanksgiving. You can also be fairly certain that you will see Christmas lights up on some houses year round. Our tradition has always been to take down all of the decorations before the end of the year to separate Christmas from our daughter’s birthday on New Year’s Eve.

Some people leave up all of their Christmas glitter and lights until the Epiphany which is generally on January 6. This day has many meanings in different religions, but it is said to be the day that the three Magi’s, or wise men, were led by the star to Bethlehem to visit the baby Jesus. Other churches celebrate this as the day that Jesus was baptized by John the Baptist in the Jordan River. Both of these celebrations have the same essence and that is the manifestation of Christ to the world.

This date is also significant in that it ends the “Twelve Days of Christmas”, or Christmastide, which begins on December 25 and ends on January 5. Other cultures, especially those of Latin America, leave up the greenery and lights until February 2 ending a 40 day celebration of Candlemas.

Many countries have local traditions that take place on the Epiphany. The United States has customs that include the Great Fruitcake Toss in Colorado where participants dress as kings and fools and throw fruitcakes as a symbolic end of the Christmas holidays.

In Louisiana, the Carnival season begins on King’s Day which is also the Epiphany. The interval between the Epiphany and Mardi Gras is known as “king cake season” and many of those will be consumed. A doll is baked into each cake and the person that finds the doll must provide the next cake.

In Virginia, the Epiphany, or 12th Night, was a night for merriment and weddings in the Colonial Days. During this time, a Great Cake was prepared and the youngest child present cut and served the cake. In the same way that a doll is baked into a King Cake, a bean was baked into the Great Cake and the person who found it was crowned “King of the Bean.”

John Milton said, “Gratitude bestows reverence, allowing us to encounter everyday epiphanies, those transcendent moments of awe that change forever how we experience life and the world.” No matter how you celebrate Epiphany, the New Year has arrived and the holiday season has ended. The decorations must come down until at least Valentine’s Day.