The City's current effort to enhance 8th Street stems from direction in its Comprehensive Plan which was most recently adopted in late 2011. 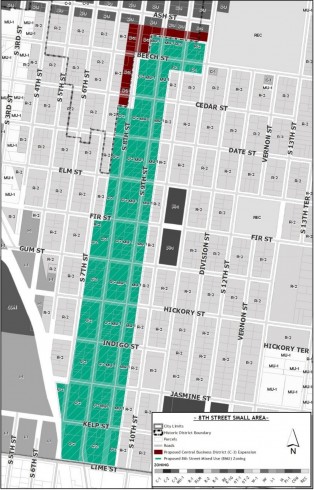 Changes are a-coming to the Eighth Street corridor as you approach historic, downtown Fernandina Beach. Through a series of meetings, hearings and public opinion polls, the stretch of Eighth Street, often referred to as an “eye-sore” may be getting a much needed facelift with the help of re-zoning.

Here is the press release:

Public Hearings Beginning in May Following citizen feedback over a multi-year process, the City has initiated policy changes for the 8th Street Small Area to allow a wide range of housing options while keeping all current commercial uses. The goal is to create a vibrant and welcoming mixed-use corridor with a unified attractive visual character that serves as a gateway and connects to the history and character of Downtown Fernandina Beach. Large-scale Future Land Use Map and Zoning District Map amendments as well as Comprehensive Plan and Land Development Code changes are necessary to accomplish this goal.

Public hearings will begin at the Planning Advisory Board on Tuesday, May 24, 2016 at 5:00 PM at City Commission Chambers. It is expected that the City Commission will consider the policy and mapping changes in a public meeting in late June.

The City’s public policy effort will involve amendments to the City’s Comprehensive Plan and Land Development Code to introduce a new Future Land Use category and Zoning District called 8th Street Mixed Use (8MU)/ MU-8. Design requirements tied to the new 8th Street Small Area Mixed Use (8MU) land use category and MU-8 zoning designation have been drafted to reflect a goal of becoming more Centre Street like by providing an opportunity for residential development mixed with commercial development. It is intended to provide for a wide-range of housing options with access to amenities located downtown. The zoning changes have been crafted to accommodate all existing uses along 8th Street and anticipate future uses for the area. It is unlikely that the City will experience immediate change resulting from the new land use and zoning within the area. Changes will occur over time through private property redevelopment and public sector infrastructure improvements.

Proposed revisions to the Comprehensive Plan and Land Development Code are consistent with the direction for changes in the 8th Street Small Area. Working together with the associated land use and map amendments, these changes seek to accomplish the following for the corridor and enabling the corridor to become more “Centre Street like” by:
-Providing flexible land use for commercial, residential and mixed use;
-Promoting pedestrian level activity;
-Serving as a gateway to downtown;
-Allocating up to 18 dwelling units per acre (The same as downtown built development pattern);
-Allowing a variety of housing types such as Single Family, duplex, triplex, townhouse, multifamily, mixed use;
-Providing a Maximum Floor Area Ratio of 2.0 (same as C-3 district);
-Maintaining the existing 45ft height limit (same as C-1, C-2, and C-3 zoning districts);
-Requiring a 6 foot pedestrian/ landscape access area fronting 8th Street – no other required setback;
-Requiring building entrances to locate on 8th Street;
-Obtaining shared driveway access points and reducing curb-cuts, where possible; and
-Adding supplemental standards for drive-thru uses and fueling stations.

In an effort to become more “Centre Street like” certain design standards are required within the new 8th Street Mixed Use land use and MU-8 zoning. Architectural articulation is required in order to promote pedestrian scale, contribute to on-street interest, and add vibrancy to the structures within the 8th Street Small Area. A mixture of materials, architectural elements, and varied arrangement of windows and door openings shall be demonstrated on new commercial, mixed use, and residential structures and commercial structures are required to have a minimum of 12 foot internal ceiling heights. Fence standards are amended to require black iron or iron-like materials which are no taller than 8 feet and permanent sign standards will defer to requirements found within the Historic District, but will not require a Certificate of Approval.

This is a brief summary of the proposed LDC changes. To review all amendments in greater detail, please visit www.fbfl.us/8thStreet.

Background:
The S. 8th Street corridor (SR200/A1A) serves as the primary entry onto Amelia Island from the Shave Bridge and into the City of Fernandina Beach and historic downtown. Historically, this corridor evolved as an extension of downtown, and served as the first auto-centric commercial corridor in Fernandina Beach. Gas stations and automobile dealers located on S. 8th Street in the mid-20th century.

As time went on, more commercial development appeared on S. 8th Street and restaurants, retail, banks, and other businesses developed along the corridor. When Fernandina Beach continued to expand with new shopping centers on 14th and Sadler Roads, and businesses also began moving to the growing Yulee area, S. 8th Street entered a period of decline. Properties have sat vacant for years, businesses have come and gone, and the general appearance of the streetscape has deteriorated.

Despite the lack of a coordinated effort, improvements to 8th Street have taken place over the past several years. The proximity to historic downtown and the benefits of being in an urbanized area served by infrastructure make the area attractive for rehabilitation. It is the hope that this effort’s associated changes to the Comprehensive Plan and Land Development Code will help further revitalize the area and provide better opportunities for reuse and redevelopment of property, while maintaining the character of Fernandina Beach.

The City’s current effort to enhance 8th Street stems from direction in its Comprehensive Plan (Guide for Growth and Development in the City) which was most recently adopted in late 2011. In early 2014, planning staff organized a working group to consider potential policies and land use mechanisms to foster and support redevelopment directives. This group assisted planning staff with evaluating options and chose to focus initial efforts on the 8th Street corridor.

Working Group & PAB:
Members of the group included an architect, engineer, the County Economic Development Board director, a commercial real estate professional, a citizen-at-large, Planning Advisory Board members, and a representative from the County planning department. All meetings were noticed and open to the public, and minutes were taken.All input was welcomed. The group met monthly from March 2014 through March 2015.

Stakeholders from particular fields or interest groups related to 8th Street and the area were invited to meet with the working group. The group immediately identified several challenges to reinvestment in 8th Street which included the following along with other that are identified in the 8th Street Small Area Plan found at www.fbfl.us/8thStreet.

1. The current zoning that includes a mix of C-1 (Neighborhood Commercial), C-2 (General Commercial), C-3 (Central Business District), and MU-1 (Mixed Use) from 7th Street to 9th Street,
2. The lack of residential zoning on 8th Street specifically in the C-2 General Commercial zoning district, and
3. The varying jurisdictions along 8th Street (city and county properties and Florida Department of Transportation ownership of the roadway).

After a year of meeting which included initial public outreach efforts through survey efforts and Viewpoint articles, the working group decided to issue its recommendations to the Planning Advisory Board (PAB). The PAB formed a subcommittee and drafted this strategy which combines a new land use designation and zoning district along with development standards for the 8th Street small area, and large-scale land use and zoning map amendments.

Outreach:
In an effort to spread the word and gain additional public input and consensus for the proposed amendments, the City’s Planning Department conducted public outreach efforts in January and February 2016 starting with a post card mail out to all property owners, business owners, and properties within 325 ft. of the affected properties under consideration for map changes. City staff collected input from citizens and visitors at the downtown Fernandina Beach Market Place farmer’s market. All stakeholders were invited to participate in a walking tour of 8th Street.

Several public meetings were held the week of February 8-12th at the Golf Course Club House, Peck Center Reception Room, and the Atlantic Recreation Auditorium. These events were well attended and addressed many citizen questions, concerns, and comments. Given the degree of changes along the State maintained roadway (SR 200/ A1A/ “8th Street”), staff provided the Florida Department of Transportation (FDOT) with an opportunity for advance review and comments on the proposed land use amendments. FDOT staff provided a through and detailed review of the revisions and offered additional data and analysis to support the City’s direction for the corridor. All state agencies will have an opportunity to review the amendments through a required coordinated review process which follows the City’s 1st reading of the Comprehensive Plan and large-scale Future Land Use Map ordinances.