Several EABC members, who are also artists, brought along art to display and a contest was held. 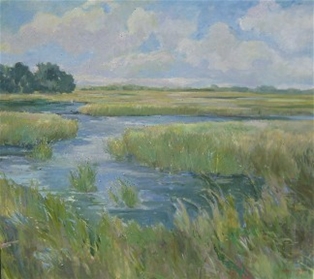 The European American Business Club held their August meeting at the Waterwheel Gallery. Several members who are also artists brought along art to display and a contest was held. They had a tie for the winner and both pieces will be displayed for the rest of the month.

The first is a beautiful photograph of an old door by Peggy Albrecht; the other is a detailed rendering of the artists home by Steve Rieck.

Stop by and check them out!

This beautiful marsh painting (pictured) captures our local scenery with an elegant impressionistic style that is so iconic for Joan Murphy. Joan Murphy was born in New York but grew up in the deep south and lived in California for a number of years. In 1993 she relocated to Florida and later moved to South Carolina.

She began her career in the filed of fashion art but turned to painting full time in the 70’s. She was enjoyed wide spread fame in California. Vacaville, Carmel, Palm Desert and San Francisco were hosts to her one person art shows at many prestigious galleries.

Though the themes of Joan Murphy’s paintings are decidedly contemporary, the influence of the Impressionists can be discerned in the artist’s masterful use of light and color.