European Debt Crisis Will Not Go Away

Italy is losing the confidence of investors, resulting in a rise in cost of loans to keep their economy going. Expect volatility to continue. 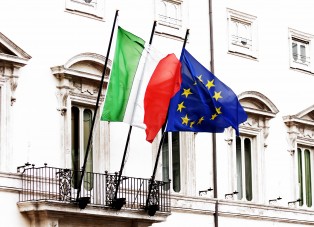 This sovereign debt problem in Europe is keeping the financial markets on edge and does not appear ready to go away anytime soon.
Despite an October 27 agreement that strengthened the bailout of Greece, the “Greek Tragedy” continues as the country’s government is a mess, Prime Minister George Papandreou is reportedly stepping down and the populace is protesting. And, with each day of delay, Greece is running out of money and European leaders are running out of patience.

Meanwhile, across the Ionian Sea from Greece, Italy is quickly becoming the next problem. Its 10-year government bond yield rose to a euro-era record of 6.4 percent last Friday. The Wall Street Journal says: “The 6% mark on the 10-year bond is seen as crucial because a breach of that level in the past has portended a sharp rise in bond yields of other fiscally frail countries.” When bond yields rise dramatically, it increases a country’s borrowing costs and suggests investors are losing faith in that country’s ability to pay its bills.

Even though Greece is grabbing most of the headlines, Italy is much more crucial to world markets than Greece, because Italy’s government bond market is the third largest in the eurozone behind Germany and France. If Italy goes the way of Greece, that would elevate the European crisis to a whole new level.  Ultimately, there’s just too much debt in the worldwide monetary system. Until it gets cut to a manageable level, expect financial markets to continue behaving erratically.

Good News on the Jobs Front

Last Friday greeted us with some positive jobs news, when the Labor Department announced that payroll jobs rose by 80,000 in October, bringing the jobless rate down a bit from 9.1% to 9.0%. Although the government shed 24,000 jobs last month, the private sector performed much better, creating 104,000 jobs in October.

Thursday brought even more great news with new weekly jobless claims finally breaking the 400,000 barrier by falling 9,000 to 397,000. In the past, whenever jobless claims fall below 400,000, companies begin cranking up new hires for the coming months. With the holiday months contributing additional temporary hires, expect to see more in the way of positive jobs reports.

Despite the expanding European debt crisis and persistent unemployment situation in the U.S., silver linings are out there.  We just have to look harder for them these days.