Everybody Has a Hungry Heart

Even if today was announced as a News day, The Federal Reserve just delivered once again, the invoice for our children and their children. News is just more of the same. 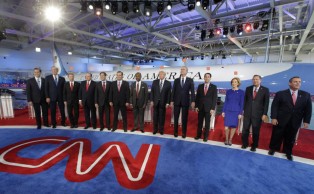 13 Candidates and Look who’s in the middle!

There is so much to write about, yet there is so little interesting stuff in the mainstream media that does not fall short of just rehashing what others like the local bi-weekly deem earth shattering. The wisdom in Bruce Springsteen’s song Everybody has a hungry heart (for publicity) still rings very much true.

It’s too late to talk about the idiot county clerk in Kentucky who thought it more important to use her religious beliefs to defy a law, than just doing the job she was hired to do. It’s also last week’s news to re-distribute my opinion on a Muslim airline stewardess (yeah I know I PC date myself. So what!) who for religious reasons refuses to serve alcohol to a passenger.

I’m way too late to call governor Chris Christie a bozo of incredulous stupidity after he announced that he was going to ask Fred Smith of Fedex founder glory to develop a tracking system for visitors to the US, as a deterrent to overstay their welcome. He actually said: “We need to have a system that tracks you from the moment you come in.”

Oh, I’m sure foreign visitors will be amused when getting a surgically removable bar code sticker slapped on their arm and they get tracked like in the good old Soviet Union.

As a presidential contender, Governor Christie would have been smart to first consult with the US Commerce Department’s “National Travel and Tourism Strategy” , which has set out to attract 100 million visitors by the year 2021, with a total estimated contribution to our economy of $250 billion (Note: that’s only $250 per visitor; a little low in my opinion considering that many come off an expensive transatlantic/pacific flight and will spend a minimum of 7 nights in this country. Ergo I’d like to find a copy of the book ” Vacation the US on $35 a day”.)

Moving on, it’s probably too late to get on the Trump Train, because the man by now has alienated at least half of the population, in spite of his questionable frontrunner position in the GOP. Do the math people and you will see there is no chance in hell he’ll get into the White House, and if he does by an act of sheer insanity, have your exit plan ready, because a Wall works both ways to keep people out and keep people in. Ask former East Berliners and Iron Curtain countries how that works.

So in search for earth shattering news I turn to the local bi-weekly and find the front page covered with a bold title that says that the “Horses on Cumberland could be removed or fenced.“

Wow, hold your horses (no pun), what idiot came up with that idea? Who is trying to erect a statue for himself here?

One paragraph into the story however it dawns on me that Park service superintendent Gary Ingram, is a smart man, who is testing the waters, much in the same way as the City commissioners tested the idea of parking meters on the beach several years ago. “It’s not on the radar anytime soon,” Ingram said, thereby avoiding a huge backlash, while still indicating that at some point in the future the wild horses will be a part of the Cumberland history; just as much as the horses history is not really native wild.

The center part of the homepage (right in-the-fold as we would call it online) delivers two stories about land swaps and government indecision that already scream boredom straight off its headlines, so when my eyes get distracted by the story of a former local announcing a presidential bid at the bottom of the page, I get excited. Steve Comley, a Massachusets native who bought a condo in Piper Dunes North in the mid 1990s, calls our local paper on August 31 with the news that he just filed a bid to run for the 2016 presidential election. How exciting!

But then comes the frown of confusion as I read that it took 10 days to arrange for a phone interview about his reasons for filing. That’s a little odd. Was the Labor Day weekend such an obstacle for a more timely interview or is 10 days old news still news? Excitement level drops to luke warm. When I read in the Newbury Port News that his appointed campaign manager is Jesus Christ, my eyes start rolling back into my head and when his paranoia embraces the NRC and Nuclear Power lobby as omni powerful, my deepest sentiments start wondering why this person gets so many columns in our local newspaper. It must be cucumber time as we say in the Netherlands.

Doing a little more research on Mr. Comley I find a 2004 article from well-known islander Jack Healan in the Jacksonville Business Journal, shedding a one sided light on the pitfalls for Florida out-of-state condo-owners. Aside from once again observing how influential people use their version of economic benefits and employment to get laws passed, I only learn that Mr. Comley was at best a part time resident of the island. Reading on I learn that Mr. Comley has a beef with the security behind nuclear energy, that he uses the military bandwagon like any other ambitious politician and that he envies Donald Trump media savvyness. Boredom by this time is making me want greasy fast food and a chance to kick someone of perceived importance.

Mr. Comley is a boring man with a conservative streak and a heart in the right place and as confused as anyone these days about economy, international affairs, energy, environment and procreation, who indulges in the fact that GOP frontrunner the Donald (that nickname used to be reserved for Donald Duck, wonder what he thinks these days) agreed with one of his nuclear fear mongering statements.

So in desperation my eyes wander to the bottom of the newspaper, still anxiously looking for something more than propaganda and sales messages and I see a piece of news that attracts my attention: Our Turtle Season sofar has produced 201 nests with 12,192 hatches, almost 50% more than in 2014. In addition to being news, that would have been qualified as good news if I hadn’t seen a special on PBS yesterday that declared most Sea Turtle Species to be extinct within the next 15 to 20 years. WHY?

Well first of all, scientific research indicates that now anywhere from 1 out of 7,000 to 1 out of 4,000 hatchlings will make it to sexual maturity of the age of 10. Netting, ocean contamination, crimping beaches, debris, obstacles and plastic; there are so many human barricades, that turtles are doomed from the start.

Now there is another problem added to the situation: it is reported that due to global warming increase of about 2°F over the last 10 years, turtle nests on the beaches now produce many more female offspring than male; actually to the rate of almost 10 to 1.

So reality reveals that out of the harvest of 12,192 hatchlings, one to two would actually live long enough to start reproducing at around age ten. Yes global warming and the rising of sea levels is a very serious problem and will effect the way we live sooner, rather than later, especially on a small barrier island.

Back to politics and the games we play: Maybe I think too much – I have definitely been accused of that “shortcoming” on more than one occasion. Maybe I just see only the negative, and yes that too has been put on my plate more than once. Yet when I got that defining clear moment during the presidential debates on TV last night, I saw the best candidate to lead this country loud and clear. This candidate could and would bring back the times when this country was the undisputed leader, guided by probably the best task dividing, value supporting and respect restoring writing in the history of mankind: The Constitution. The fighter for freedom and the provider of opportunities for everyone. I saw Carly Fiorina’s power of the word, Donald Trump’s entertainment value, Ben Carson clear thinking and humanity, Scott Walker’s energy and will to try and take responsibility, Jeb Bush’s intelligent experience and Rand Paul with the guts, honesty and down to earth thinking that runs in the family. This country is too big to be sitting on the shoulders of one person, who carries the responsibility, even if his name would be Frank Underwood.