2016 (Radko) Shrimp Festival Christmas ornament is now available at The Christmas Shop on the River in Fernandina Beach. 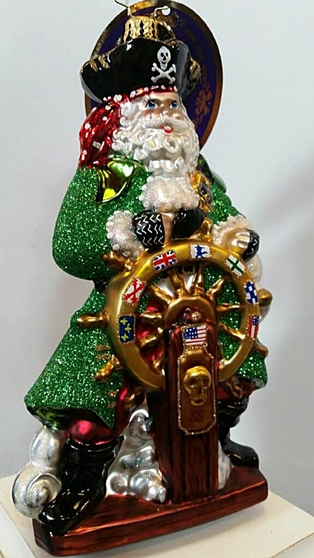 The 2016 Isle of Eight Flags Shrimp Festival Christmas ornament, designed by The Christopher Radko Company, is now available at The Christmas Shop on the River in historic, downtown Fernandina Beach, Florida.

This year’s ornament, “Pierre Corsair” is an exclusive design, and part of a collectible set of ornaments with shrimp, pirates and other sea-worthy creations created just for the Shrimp Festival!

Pierre Corsair, blown from clear tempered glass, is injected with liquid sterling to give the ornament its luminescence. Hand painted details include Amelia Island’s eight flag history detailed on the ship’s wheel Pierre clings to. Careful attention is given to the delicate nature of his traditional pirate hat and accompanying head scarf. Pierre’s blue eyes sparkle and his rosy cheeks are reminiscent of Kris Kringle, though his jacket is green with golden trim. His red sateen pants are neatly tucked into his rugged black boots and the entire ornament is adorned with the fabulous trim and glitter giving the ornament its signature Radko “sparkle”.

Each Christopher Radko glass Christmas ornament is handmade using molds carved by hand. Craftsmen use the same process used during the Renaissance period in molding, glass blowing, lining with silver, painting and finishing the ornaments by hand to deliver the finest glass ornaments. It takes several weeks and an entire team of artists to create a Radko ornament.

The Christopher Radko brand of ornaments is synonymous with quality and craftsmanship, and this year’s Isle of Eight Flags Shrimp Festival exclusive ornament is a fine family heirloom.

For more information about these limited edition ornaments, or to order yours, please call (904) 261-0747.