Existentialism and the Attraction of Sliding Glass Doors

Success or survival will depend on our ability to acquire an appreciation for cultures and customs; an appreciation that comes natural to those of us who slip through a sliding glass door once in a while. 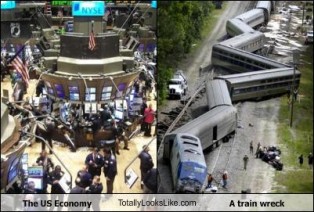 Wall Street has been laying the tracks to our Train Wreck

I have lived most of my life being attracted by opportunities that come from slipping through quick moving sliding glass doors. And as the plots of my life have been unfolding I realize more and more, essentially because numerous people keep pointing it out, that I have done a lot more than most people do in a lifetime. As plots unfolded quickly over the years, some more interesting than others, some more mysterious, more frightening, more crazy, more fulfilling, it was not until the recent economic downturn that I have been able to step back from daily distractions to observe unfolding dramas and recognitions in the world we live in. I admit that I had some help figuring it out reading Paulo Coehlo’s 65 million copy novel the Alchemist, as we walked parallel roads through life.

Now that I am no longer quite so young, I have become more acutely aware of events that can send anyone’s life in a tailspin or… an entirely new direction, filled with new priorities that trump all that came before it. Love, disease, tragedy, opportunity, change; there are many unexpected, uninvited and unwanted events that come up in a lifetime; many of which could have been controlled and adjusted if there had been a plan, a script of some sorts. No I’m not talking about a plan that smothers, neither am I talking about tragedy striking or a deadly disease. There is no plan for that. I’m talking about unwanted pregnancies or having the opportunity to get a college education or a sporting career slide by, because puppy love gets in the way, or mom’s cooking is wonderful. Don’t laugh…I have met thousands of people whose lives never unfolded because there was a short term attraction that stood in the way, when the time was right to spread their wings or slip through a sliding glass door.

As a child of the sixties, sandwiched between two super powers in a Cold War I became intensely aware early on that life always inevitably will morph into a process of incremental downward grinds, leaving an existential nothingness. With that in mind I have always scripted my life to be a rousing adventure of sorts that has taken me around and across the world many times over. Besides of course travel and experiencing culture at the roots level,I always enjoyed the added benefit of meeting many interesting people, seeing breathtaking sceneries and panoramas and being a participating witness in some historic moments on various levels.

When I read French philosopher Jean Paul Sartre in my early high school years I knew that my life would follow the road of existentialism, without realizing the unintended “victims” I would leave behind as I moved at top speed around the world. Victims mostly, who could never adopt, let alone adjust, to the essence of this school of thought. Loosely translated existentialism portrays that, bad health and accidents that can strike anyone at any time aside, we are the actors, authors, producers and directors of the lives we ultimately live. Consequently I have always put emphasis on the next scenes of my life. How do I want them to play out and what can I do to accomplish that? And yes words like egocentric and egotistical have been thrown at me on more than one occasion, mostly by companions with a nesting gene.

Excessive amounts of money or an abundance of toys were never part of my life’s equation, because in my early experience, when I had ready access to both, I quickly learned that both slow you down. And you can not be slow when a sliding door to opportunity quickly opens and closes. Watching TV, playing games, being glued to other people’s lives as they unfold, was never part of my scenery. Because of that I have never given it much thought why so many people cast themselves as walk-on characters in their own lives, and not as the lead.
Is it fear, is it laziness, is it comfort zone behavior, is it being locked up in a closet of our own doubts and lack of confidence? Is it because by the time we get around to thinking such thoughts, we are already so hidebound by past experiences that we can no longer dream of more interesting roles or paths to follow?
Over the years I have met so many people engaged in a private dialogue along the lines of, “I have tried to learn another language and failed, so that’s not for me.” Or, “I’m too old for something that radical, I’d rather play golf on my Sundays!”  or… or…  The ability of humans to create reasons to avoid action is literally infinite.

Over the years I have come to accept that some people supposedly envy me for my travels and experiences, because they never had a good enough reason to change. Deep down however, most people are happy with the way things are in their lives. Having been in business for myself over the past 31 years, I have heard thousands of people, friends and family talk about making changes, but when it comes time to take action, nothing ever happens. They resolve themselves to hunkering down in a ditch of their own making, hoping against hope to muddle through until the passage of time fills the ditch in, usually with them in it.

Yes, I’m older now and happy where I am. Amelia Island is Paradise for those who see its beauty and its community for what it is. I grew up in the hills of Southern Holland near the German and Belgian borders, a respectable distance away from the ocean, but very early on realized that water was my lifeblood. Not a lake or a river; only that vast powerful ocean would do, if not on it, than at least at view’s distance. I need to see the water, hear the surf, taste the salt in the air and feel the ocean breeze coming from thousands of miles away. I need to feel the fine sand between my toes. I had to travel thousands of miles across oceans and land and work hard for many years to get there. And that’s where I come to the essence of this essay.

I recently asked my partner Judie in our Monday morning meeting, how she felt about the economy and where we’re heading and she simply said: “We’re heading exactly where you and Ric (I miss your analytical research brother Ric) have been writing about over the past 3 years or so. It’s going to be real tough here for a long time.”
I asked her that question because we agreed a long time ago that we would respect each others opinions, even in writing, which cannot always be easy for her because I am a grass roots libertarian (no not liberal dumbwit!) whose beliefs, views and actions are deeply anchored in the sanctity of the individual, light years ahead of the political aberration called “the greater good” syndrome that seems to be prevalent these days. I am convinced that the future of our civilization hinges on the right of individuals to pursue their lives in decency and elective support of each other, rather than commanded support. The greater good syndrome that is strangling the sanctity of the individual comes from people who prefer to follow status-quo life scripts – scripts of such stark simplicity and fear, that they can be readily summed up on their tombstones – a kind of muddling through to the final scene, exit stage down. And for those who still have no clue about the oncoming trainwreck that started on Wall Street now 3 years ago, I’m sorry to say, muddling through in the next two decades or more is not going to be easy and not for the faint of heart. Are there answers? Of course there are…always, but they may not be on your doorstep or at the edge of town.

While for the old and weary it may be too late for a complete rewrite (take it to the limit one more time), it’s not too late for the young – especially here in the US where dissolving expectations about the American Dream affect whether a young person views themselves as successful or not.
The latest census data last week showed just how those expectations are being dashed. A Forbes article on the topic said:

“In record-setting numbers young adults struggling to find work, are shunning long-distance moves to areas of opportunity to live with Mom and Dad, delaying marriage and buying fewer homes, often raising kids out of wedlock. They suffer from the highest unemployment since World War II and risk living in poverty more than others – nearly 1 in 5.
New 2010 census data released last week show the wrenching impact of a recession that officially ended in mid-2009. It highlights the missed opportunities and dim prospects for a generation of mostly 20 and 30-somethings coming of age in a prolonged slump with high unemployment.”

If there was ever a time to toss life scripts involving the whole “just getting by” story line into the trash, it is NOW. No matter your age, you need to be thinking in terms of living the life you really want(ed), because at this point there are few if any safe routes to follow.

Again, that’s not saying there aren’t opportunities, but rather that it’s going to take more effort – probably a lot more effort – than was required during the long economic expansion following World War II. There were a number of reasons for that boom – technology, a downtrend in taxes, an inexpensive work force, education, an opening of global markets – but for the last decade or more, that boom was increasingly fueled by explosive levels of government spending, creating massive credit dependency and enormous sovereign debts around the globe.

The story of the next decades will be one of unwinding excess and not through the honest action of default, but through inflation that strikes a knife in the economic heart of the nation – the formation of capital that is so critical to future growth. Simply, it will be a period of decline and the paring back of the American Empire. We have been writing about the signs on that wall for quite a few years now.

As always however throughout history, for those willing to act boldly, to roll up the sleeves in much the same way as the early explorers and movers did upon arriving on the North American continent, it usually is also a time of great opportunity. That opportunity may have to be captured in a different area of the country, a different field of knowledge, or even in a different country, but that should be just a detail. Success or survival will largely depend on the ability to acquire an appreciation for cultures and customs; an appreciation that comes natural to those of us who slip through a sliding glass door once in a while.