Faces and Stories from the Pétanque Tournament

Well the story goes that Claudy Weibel is not only a magician on the Pétanque court, he apparently wiped the floor in pool with about every shark in the place. 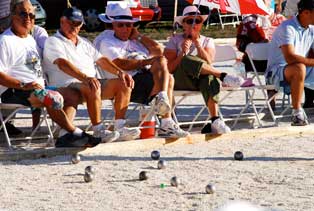 Playing Pétanque in the afternoon sun

It’s funny to report that it apparently takes a while before an event like the recent Petanque tournament reaches the various layers of society. The other day I was talking with Dave Mason from the air conditioning and refrigeration company with the same name, who has since turned into a true Pétanque afficionado, to the extent that he built a court in his front yard. The story came of course on the topic of Claudy Weibel, former World Champion and current European Champion and his unbelievable talent to hit the boules. But this time I learned something else about him.

Dave confided in me that apparently one evening a group of the players ended up in one of Philippe’s favorite bars (the place reminds me of a Belgium Pub he says). The Hammerhead on the corner of Sadler and Fletcher. Well the Hammerhead is known as the island’s pool hall where lots of pool sharks hang out. Well the story goes that Claudy Weibel is not only a magician on the Pétanque court, he apparently wiped the floor in pool with about every shark in the place. The whisper in these circles is that they have never seen someone of that caliber here on Amelia Island. This in itself is another lesson, because in Europe we know not to ever be challenged by a Belgian in pool or billiard. It’s the nation’s number one sport behind closed doors and they have delivered world champions since memory serves.

Another interesting tournament player was Larry Cragg from Marin County, California. An old school steel pedal and banjo musician, Larry has been the guitar tech and repair guy for Carlos Santana, Jefferson Airplane, Steve Miller, Mike Bloomfield, the Rolling Stones, Bob Dylan, Bruce Springsteen and many more. And since 1973, he has worked as Neil Young’s guitar tech both on the road and in the studio, while playing banjo on stage with him. Remember the song “Old Man”? Yep, that was Larry!

These days when he’s not playing Petanque or touring with Neil Young, he operates a vintage instrument rental website appropriately called www.vintageinstrumentrental.com. Being a musician myself I made the mistake to go the site and woke up hours later from a dream in which I played a 1961 Gibson Special with two P-90’s like Santana on Woodstock on a Marshall JCM 800 with the original Cone Celestions 800 in the Speaker Cabinets. If you’re into that kind of thing I advice you to check out Larry’s site on a cold and rainy winter day. It’ll get your blood pumping.

Then there is the story about the two German players who were told at Jacksonville “International” Airport upon their arrival that they could exchange Euros for Dollars on the island. Well we learned fast that the banks here on Amelia Island are way behind on that thought. To exchange Euros into Dollars is not possible and if you want to exchange dollars into Euros you’d better place your order two days ahead of time. Now I can imagine our local banks not being overly interested in keeping Zimbabwean Dollars in their cash boxes, but Euros??? Here’s a head’s up to our local banks… next year, for the second weekend in November, please think about accommodating the Euro at least, because the next tournament is going to be bigger and better and it comes out a little sloppy when the German team has to go all the way up to Savannah to get money exchanged. Guess Jacksonville banks have a similar problem?

We get emails every day from people that were here or want to learn more about Pétanque. People sign up on Facebook and offer assistance. It’s just interesting to see and hear the reactions to this relaxed, yet highly competitive ball game. Learn more here.