Uncle Sam tried to fool us…with his blood stained, ripped clothes, an axe and a meat cleaver…shuffling along. He thought he could pass himself off as a FAKE zombie. 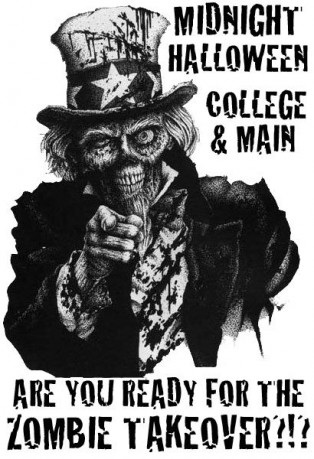 Uncover the real zombie underneath the fake zombie

Imagine going to a Halloween Party and ending up in the following, admittedly one-sided conversation with a Dress Up Zombie.

Zombie: “Yes, I have been on the Ways and Means staff for about 15 years.”

You: “What do you think will happen in January…when they take another swipe at budget control?”

Zombie: “Oh, you know…it has nothing to do with budget control. This is pure politics. Posturing. Posing. For many of them it was just an opportunity to get their names in the paper. I don’t think it turned out the way they planned.

You: “But there are some real believers in the group too. And I don’t think they necessarily lost as badly as the press reported. They’ll be back. And we’ll have another show.

Zombie: “The real issue, or the real problem for all these guys, is that they are elected by the average voter. And the average voter hasn’t gotten much out of this administration or this Congress. The average voter has gotten poorer. His family has less disposable income. His children have a harder time finding jobs. His cost of living is rising faster than his income. He looks around and he sees Iraq reverting to a bloody mess. He tries to sign up for Obamacare and the website won’t work. He reads the paper and he discovers that US students rank last among developed nations in math and sciences – despite spending a lot more on education.

And he sees too that he spends twice as much as other people on health care – and dies earlier.

And now, the economy has become arthritic too. The rate of new business start-ups has fallen…people are afraid to switch jobs…and indicators of social mobility show us less dynamic than Europe. That is, if you’re born poor in America, you’re more likely to stay poor than you are even in Europe…where nothing ever changes.
He looks at all this…and the voter gets fed up. And I think that’s what’s really behind this Tea Party vote. They’re not really for freedom… or in favor of less government spending. They just think something is wrong with the whole system. They don’t know what to do about it…except to try to stop government, and even that they don’t know how…”

And that’s when you realize dear reader, that you’re looking at a fake zombie, camouflaging the real zombie underneath.

And for your own Halloween fun ask yourself this question: In the absence of government would people still willingly give you money to do whatever you do or don’t do? If the answer is no or not likely, then you are probably a zombie and your contribution to society is at least non-essential, and maybe even counter productive.