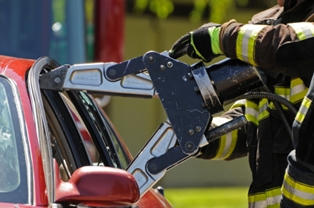 Fernandina Beach, FL – On Monday, December 20 at 9:05pm, Firefighters from the City of Fernandina Beach Fire Stations #1 and #2 were dispatched to a “rollover” motor vehicle accident at the intersection of Olive Street and South 8th Street. When the Firefighters arrived at the scene of the accident they found two vehicles, a red passenger vehicle and a white pick-up truck, in the South bound lanes of South 8th Street that had been involved in the crash. The impact of the collision had caused the pick-up truck to roll over on its side leaving the driver trapped inside the vehicle.

The occupants of the smaller passenger vehicle were denying injuries so the Fire-Rescue personnel concentrated their efforts on freeing the trapped victim from the pick-up truck. The Firefighters removed the windshield of the truck and one rescuer was sent inside the vehicle to assess the patient. Simultaneously, the other Firefighters on the scene stabilized the vehicle and utilized a hydraulic extrication tool (“Jaws of Life”) to cut the roof off the truck which provided a means of removing the trapped victim from the vehicle.

It took nine Firefighters approximately 10 minutes to remove the roof from the vehicle and extricate the trapped victim through the opening. Once freed from the wreckage, the victim was transported, in stable condition, by Fernandina Beach “Rescue 101” to Shands Trauma Center for further evaluation.