City Commissioner thinks asking for an accounting of our money that was foolishly given away in March 2013 (without any agreement or contract) is wrong. 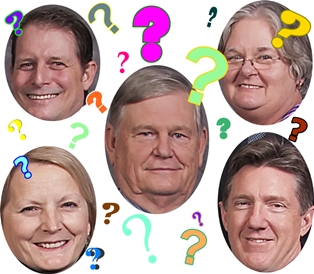 SearchAmelia is thrilled to have Dave Scott offer his commentary and opinions to us; he always manages to comfortably manipulate us to drink his Kool-Aid while we yearn to keep things in perspective… much like our head-shaking reaction to the apology from Commissioner Gass to Lynn Williams – WTF?

Commissioner Pat Gass’ inexplicable apology to gadfly Lynn Williams at the June 17 Fernandina City Commission meeting expressing her dismay at Mayor Ed Boner’s legitimate June 3rd questioning of Williams for an accounting of $8,000 in tax payer money it gave him for a harbor dredging concept, was so inexhaustible it appears the voices in her head of folks that don’t vote and never attend commission meetings, that she claims to represent, were working overtime stoking her mental furnace.

Said Ms. Gass, “Mr. Williams, I’d like to publicly apologize to you for the last meeting and not defending you. You have done nothing wrong, and I’m sorry I didn’t come to your support. We the Commission owe you thanks and gratitude. You have kept us informed every step of the way. You have done everything we’ve asked you to do. Thank you. I apologize for not coming to your aid two weeks ago when you were called out and called down. It was embarrassing. It was humiliating, and I apologize for my lack of response, but I was just dumbfounded. I offer you my most sincere apology.”

What the…? She was dumbfounded? It’s the taxpayers who are dumbfounded. How could this commissioner think that asking for an accounting of our money that they foolishly gave away in March 2013 without any agreement or contract, is wrong and the guy who got it deserves an apology when he was rightfully questioned about how it is being spent?

Why was Commissioner Gass falling all over herself in an act of contrition for Mayor Ed Boner’s justifiable questioning of Williams when he rightly asked Williams to account for the eight grand of our tax money he had been given well over a year ago, without any kind of signed agreement and no accounting up to that point?

But wait, it gets even goofier. Williams, prior to showing Dutch dredging firm Van Oord’s promotional video of a water injection program of the sort he’s suggesting, jumped on the apology band wagon, telling the commission his “hostile” comments last week may have resulted from him being too thin skinned, but he did verbally account for $3,380 of the eight grand saying it was spent on a pump, valves, gauges and travel expenses. That’s a beginning, now where’s the rest of it?

Much to his credit, Mayor Boner was not swayed, and emphasized that he looks forward to another update and that he is the kind of guy who looks at numbers and budgets, a welcome relief from those groveling apologists who obviously don’t care how our tax money is spent.

Commission Johnny Miller, who was not on the commission when the money was given to Mr. Williams, appeared bemused by Commissioner Gass’ gushing act of contrition as did several citizens attending, who swapped puzzled glances at one another during the apology parade.

I don’t know a darn thing about dredging and I hope Williams’ concept has merit, but I do know that election day can’t come soon enough so we can rid ourselves of the Moe, Larry and Curly trio that have turned the commission chambers into a slapstick comedy venue.

To read more from Dave Scott, visit his blog at DaveScottBlog.com.