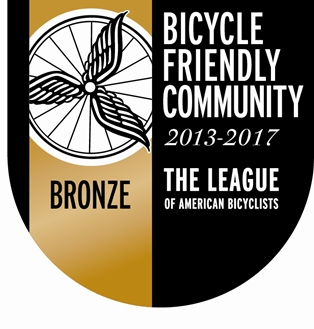 Fernandina Beach, FL – As bicycling continues to grow in popularity, leaders in cities across the country, like Fernandina Beach, are embracing the environmental, financial and quality of life benefits that come with a population that likes to ride. Today, the League of American Bicyclists announced the latest round of Bicycle Friendly Communities (BFC) and Fernandina Beach has been named a Bronze Level BFC. Fernandina Beach is one (1) of eleven (11) communities in the State of Florida to receive a BFC designation status. The City along with Weston, Florida is among only two (2) new communities to receive a designation under this application cycle and now rank among the other top Bicycle Friendly Communities in the State. Gainesville and Venice are the only two (2) communities to have achieved a Silver BFC status. The cities of Boca Raton, Lakeland, Miami, Orlando, Sanibel, St. Petersburg, and Tallahassee attained a Bronze BFC status under prior application cycles.

“We are inspired when we see places like Fernandina Beach making bicycling safer and more convenient,” said Andy Clarke, President of the League of American Bicyclists. “We know that investment will be returned many times over in the health, environmental, transportation, and quality of life benefits of a thriving, attractive community.”

The BFC program is transforming the way communities evaluate their quality of life, sustainability and transportation networks, while allowing them to benchmark their progress toward improving their bicycle-friendliness. With this impressive round, there are now 259 BFCs in 47 states across America. The Bronze Level BFC award recognizes Fernandina Beach’s commitment to improving conditions for bicycling through investment in bicycling promotion, education programs, infrastructure and pro-bicycling policies.

Of these achievements, the City finds the following to be the most significant:
1. Adding Bike Lanes on Fletcher Avenue / A1A from Atlantic Avenue to the end of Amelia Island;
2. Winning two (2) Safe Routes to Schools grants with the completion of one in 2012 and the second set to begin in 2013; and
3. Bike Fernandina Safety Expo and Youth Bike Rodeo held in October 2013 which provided children and adult bicycle safety information and formal instruction.

To continue improving its ranking the City, along with its partner organizations, have several planned activities within the next year including:
1. Construction of a path along S. 14th Street from Atlantic Avenue to Hickory Street (currently under construction);
2. Adding a bike path from Peter’s Point Beach to the end of Amelia Island;
3. Adding 2 new mountain bike trails within the Egans Creek Greenway to total roughly 1.5-2 miles of new mountain bike trails; and
4. Completion of designed improvements for Safe Routes to Schools for the Emma Love Hardee and Southside Elementary Schools.

The BFC program provides a roadmap to building a Bicycle Friendly Community and the application itself has become a rigorous and an educational tool. Since its inception, more than 500 distinct communities have applied and the five levels of the award – diamond, platinum, gold, silver and bronze – provide a clear incentive for communities to continuously improve.

To learn more about building a Bicycle Friendly America, visit . The League of American Bicyclists promotes bicycling for fun, fitness and transportation, and works through advocacy and education for a bicycle-friendly America. The League represents the interests of America’s 57 million bicyclists, including its 300,000 members and affiliates.