Fernandina Police Officer of the Year 2013

Detective Tina Smith was selected as the Fernandina Beach Police Department 2013 Officer of the Year. 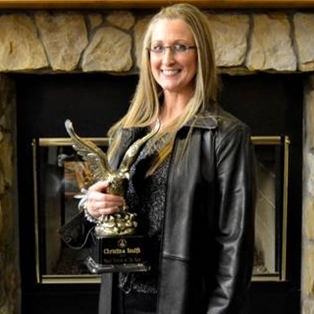 Fernandina Beach, FL – Detective Christina “Tina” Smith was commended often during the past year for consistently outstanding police work and for her dedication to the police department and our community. As a result, she was selected as the Fernandina Beach Police Department 2013 Officer of the Year at a formal ceremony on January 31st at the Fernandina Beach Municipal Golf Course.

Chief Jim Hurley outlined some of her accomplishments to the crowded room and the highlights were impressive. Detective Smith was assigned to investigate a theft from the Nassau County Branch of the State Health Department. A suspect was identified in that case and was subsequently arrested. Further investigation revealed that the same suspect was likely responsible for unrelated criminal activity, and Detective Smith was eventually able to tie this person to more than $60,000.00 in funds that were embezzled over a period of two years after pouring over thousands of pages of bank and business records.

Detective Smith was also commended during in 2013 for her good work on a burglary investigation where a laptop, among other things, was stolen from the residence. She was able to secure a warrant, arrest the offender, and recover the laptop and other property. This offender had an extensive criminal record and was bold enough to enter an occupied residence to commit his crime.

Detective Smith was also commended for her good work in the arrest of a construction manager who systematically took brass valves, copper fittings, and scrap metal from a construction site with a total value of more than $30,000. The manager was able to cover his thefts because he could re-order parts and hide the purchases. Detective Smith methodically reviewed hundreds of photographs and sales records, visiting a number of businesses in Jacksonville and surrounding area and was able to build a solid case, secure a warrant, and arrest the suspect.

Detective Smith was also commended for her good work investigating a report of a vehicle stolen from the Greyfield Inn parking lot. By staying informed of criminal activity in the region she learned of a bank robbery in Glynn County, GA. She was able to tie the bank robber to our stolen vehicle and help Detectives in Georgia locate and arrest the offender, after processing a discarded Coke can for DNA and getting a hit from FDLE. She then interviewed the offender, obtaining a confession statement for the stolen car and charging the offender in Florida.

In addition, Detective Smith is often commended for her good works around the community. She regularly leads and participates in police department and community activities, such as the Special Olympics Torch Run, Shop with Cops, and the Montessori School Chili Cook-off. She routinely and unselfishly volunteers her personal time for events that benefit children.