In the News, Interesting Locals

White's family and friends were in attendance, as well as many current and former co-workers. 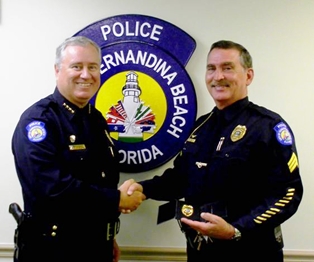 Sergeant White announced his retirement from the Fernandina Beach Police Department at a ceremony in his honor earlier this month. White was commended by Chief Jim Hurley, who told the crowded room that, “It will not be easy to replace a solid individual like Mitch White, or his thirty-one years of police experience, training, knowledge, skills and abilities, and lifetime of organizational memory.”

White’s family and friends were in attendance, as well as many current and former co-workers. Retired Fernandina Beach Police Officers Jack Bass, Paul Carter, Hoyt Johns, Ron Brizele, and James Hatton were among those who showed up to honor Sergeant White, as well as numerous other professional associates.

Mitch White was born in Jacksonville, Florida and raised in Macclenny. After graduating from high school he enlisted in the United States Air Force and served in the Florida Air National Guard for 30.5 years, attaining the rank of Master Sergeant. He retired from the Air National Guard in July, 2008.

White was hired by the Fernandina Beach Police Department in May, 1981 and promoted to Police Sergeant in April, 1991. He transferred to the Detective Division in 1991 and was assigned as the Lieutenant of Investigations between 1994 and 1996. Most recently he has served as a patrol supervisor on the midnight shift.

During the course of his career he worked in the Street Crimes Unit, specializing in narcotics operations, and led several undercover narcotics investigations, working with numerous local, state and federal law enforcement agencies.

Sergeant White served as the supervisor of the Field Training Officer program and was a certified Intoxilyzer Operator. He was a member of the department’s first SWAT team he established the department’s Honor Guard. He also served as a ceremonial mounted officer.

Mitch White was the Police Department Officer of the Year in 1988 and 1991.