After last year's experience rebuilding a Katrina destroyed home, the PDA is back in New Orleans for another tour of duty 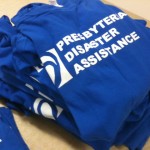 Fernandina Presbyterians are back in New Orleans to give assistance

My friend Helmut Albrecht and a crew from the Fernandina Beach Presbyterian Church went west again to help out victims of hurricane Katrina which devastated the Gulfcoast area now almost 6 years ago. Last year they spent a very gratifying week rebuilding a home just outside New Orleans in Houma, when the region was suffering from the Oil Leak in the Gulf and this year New Orleans is in the cross hairs of their unwavering urge to help people. Here is the first one of Helmut’s daily updates (and pictures, which I like in particular because of his keen eye for detail).

FPC is again on a mission trip; this time in new Orleans. 11 of us took camp at the Olive Tree volunteer village – guys on the second, girls on the first floor-.
We were joined by a group from Illinois and today one from Arkansas. Our Amelia Island group will work at two locations, one of them is on 4th street downtown New Orleans.

Our camp became a Presbyterian disaster assistance camp after Katrina and was just handed over to the project ‘Homecoming Organization’. So far 130 homes have been build from this camp.
Last night was orientation: intro, chores (there is a large chore chart at the camp, (picture). 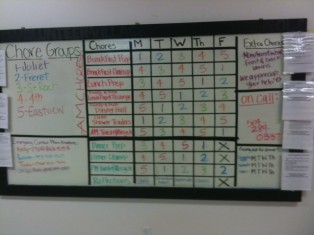 A Planboard with Chores at the Village Campsite

The Evening program is planned and I am looking forward to famous New Orleans chef Laura; she will cook for us on Wednesday evening.
After the orientation we packed our safety equipment and are ready for tomorrow (Monday).
Recover, rebuild, rejoice, is the motto of project homecoming and our motto for the week.

Publisher question: Helmut, usually girls sleep on second floor and guys on first because of safety. What is reason for this reversal? (Fire hazard maybe?)