The Food Network has made a few changes to the program they will be airing that was filmed during the 2014 Isle of Eight Flags Shrimp festival. 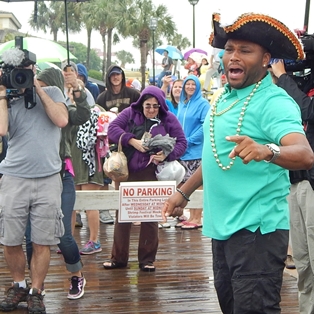 The Food Network has made a few changes to the program they will be airing that was filmed during the 2014 Isle of Eight Flags Shrimp festival. What was to be titled Food Fest Nation and premier on July 21st, then the 29th, is now titled Eating America and will begin airing July 28, 2014 – but you may want to check your local listing for the most recent information.

Here is the latest from the Food Network’s website:

On the new series Eating America, premiering Tuesday, July 28 at 9|8c, host Anthony Anderson is on a mission to discover the most flavorful food festivals in the country. Food Network fans may recognize Anthony Anderson from Chopped, where he competed on a special holiday episode, and from Iron Chef America, where he’s been a frequent judge. This food lover is now taking on a new venture in Food Fest Nation, tasting everything from classic interpretations of regional fare to surprising twists on favorite dishes. Anthony will get to the belly of what is truly at the heart of America — one food festival at a time.

In this eight-episode series, Anthony visits some of the most unusual food fairs around the country. Not only does he try the local specialties, but he also meets the people who create them, including a few unforgettable characters.