Financial Markets Tied in Knots as Fed Does “The Twist”

Ladies and gentlemen, the Captain has turned on the fasten seat belt sign. We are now crossing a zone of turbulence and your seat cushion may not be enough to keep you afloat. 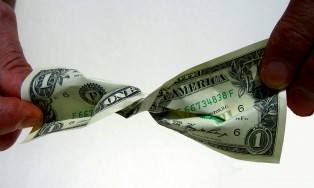 Twist long enough and you're left with half a dollar

In a much anticipated action dubbed “Operation Twist,” the Federal Reserve announced last week it would reshuffle its balance sheet by selling $400 billion of shorter-term Treasury securities and use the proceeds to buy longer-term securities. Although broader financial markets were not impressed, the Fed said it hopes the action will lower longer-term interest rates and, “contribute to a broad easing in financial market conditions that will provide additional stimulus to support the economic recovery.”

Regarding interest rates only, the Fed’s action has worked. The yield on the 30-year Treasury bond declined from 3.2 percent the day before the Fed’s announcement to 2.9 percent just two days later, according to data from Yahoo! Finance. That’s a rather dramatic decline for such a short period.

Unfortunately, the stock market failed to respond positively to the Fed’s announcement as the S&P 500 index lost 6.4 percent for the week. The market’s drop, though, went beyond disappointment in the Fed’s action. The following also contributed to the market’s red ink:

•    Increased fears of a Greek default.
•    Rising concern of a world-wide financial crisis, with sovereign debt at the epicenter.
•    Growing signs of sluggish economic growth in China, which had been one of the few countries immune to economic turmoil.
•    A 13 percent drop in the price of copper on Thursday and Friday of last week, which is concerning because the price of copper is often viewed as a proxy for worldwide industrial growth.

With the market’s blood pressure rising, it reminds us of what flight attendants often say. “Ladies and gentlemen, the Captain has turned on the fasten seat belt sign. We are now crossing a zone of turbulence. Please return to your seats and keep your seat belts fastened. Thank you.”  In the event of a financial water landing, though, will your seat cushion be enough to keep you afloat?