Fire Will Never Say It Had Enough

The Hawaiians have an old wisdom which applies to government and the 2010 Census: Fire Will Never Say It Has Had Enough 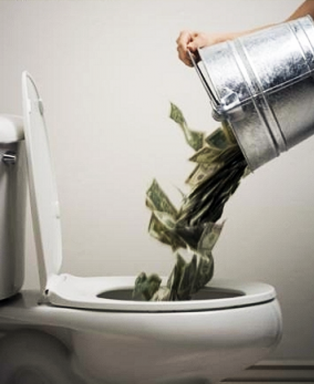 14 Billion Dollars to Count the US Population?

There is an old Hawaiian Wisdom (Aole E Olelo Maiana Keahi Ua AnaIa) that reveals the mechanisms as to why Governments will never stop requiring more; more of your hard earned money, more knowledge about you, more sacrifices from you. It is the nature of the beast. Fire will never say it has had enough.

A few days ago I briefly touched on the 2010 Census as a potential contributor to Washington’s short term employment plan.
I might not have formulated my thoughts into an editorial on the issue of compliance or non compliance with the 2010 Census, if not for the numerous amount of people that have brought the issue up to me in recent weeks, as it happened again last night during a dinner party. In 30 years here in the US, I have never witnessed this level of discontent and the emergence of “civil disobedience” and the dilemma whether to cooperate with the census or not.
Of course I do not preach disobedience, at least not to people who never question the right of government to mingle in its constituents every day life. What I do constantly however, is match up intention versus constitutional rights. The Bill of Rights in the Constitution needs to reflect our rights versus our obligations, and the Government’s approach to information gathering and the explanation of the 2010 Census just doesn’t cut it.

First there is the issue of cost

Spending $14 billion is a lot of money for bean counting, especially when you look at it from the stand point that the Constitution actually only allows the Federal Government to perform this act as a total population count. Nothing more nothing less. A task that could probably be accomplished for less than $14 million.

Next is the potential penalty that this government has put on the act of non-compliance. Ten years ago it was $100 for non cooperation, yet this time around, they’ve upped the ante and you’re theoretically subject to a fine of up to $5,000. I know we are seeing some inflation, but not yet of these proportions.

When the founders of this nation wrote the Constitution, they actually gave the government the legal authority to count the Nation’s population, even if only for the silly reason that they would need to know how many people there were, in order to know how many representatives they should have in Congress, the Senate and many other “representative” layers of legislative uselessness. Absolutely self serving, but an understandable move to accomplish job security.
Now if that were the only number needed and they would only come to the door and ask how many people lived in the house, most people could accept that.

Don’t Let the “Only 10 Questions Form” fool you.

But as always, that’s not all there is to it – it’s gone far beyond that and participation can be to your detriment, in spite of all the Happy People dancing in the streets commercials on TV to entice the population to participate in the 2010 Census. Inspite also of the claim that the 2010 Census is the shortest in a long time.
And even though the 10 questions on this year’s form at first glance look somewhat harmless, the economic, social and cultural information gathered goes far beyond the need for an exact count and if crunched into the “proper” statistics and demographics, it will ultimately expose all of us to some form of government tiranny.
It makes perfect sense to be vigilant about personal information where it concerns government access to your privacy right. History has shown over and over how easily ALL governments betray your trust when it fits their agenda.

Just in case you haven’t seen your “package” yet, here are the questions on the 2010 Census and some context about what the federal government wants to know about you and why.

Question 1. How many people were living or staying in this house, apartment, or mobile home on April 1, 2010?

Question 2. Were there any additional people staying here April 1, 2010 that you did not include in Question 1?

• Children, such as newborn babies or foster children
• Relatives, such as adult children, cousins, or in-laws
• Nonrelatives, such as roommates or live-in baby sitters
• People staying here temporarily
• No additional people

Why does the government assumes stupidity on our part? Question 2 would not be necessary if question 1 was appropriately described. But by asking question 2, the demographics of the dwelling population becomes clear. Room mates assume a different financial arrangement as does a live in nanny. Just ask the IRS.

Question 3. Is this house, apartment, or mobile home –

You answer this question and you may as well give your social security number, bank accounts, credit rating, credit cards and everything else that pertains to financial privacy.

Question 4. What is your telephone number?

The explanation for this question is that Census officials ask for phone numbers in case they have to follow up because a form is mailed back with incomplete or missing information.

Question 5. Please provide information for each person living here. Start with a person here who owns or rents this house, apartment, or mobile home. If the owner or renter lives somewhere else, start with any adult living here. This will be Person 1.

According to the Census Bureau, listing each person’s name helps the person filling out the form include all household members, especially for large households. As in the rest of the personal information included in the survey, the confidentiality of names is protected under federal law.

Okay now it’s time to get real serious, especially where it says confidentiality of names is protected under federal law. At this very point I would firmly start making a stand and give the surveyor the number of people living in the unit and firmly but friendly close the door. And if you don’t understand why I give you the advice to do the same, there is not enough advice in the world for you. Period.

Also remember that if there are 5 people in a home, the time involvement gets quite extended, also because questions 6 through 10 are for each person living in the unit to fill in. And here they are:

The explanation of why census asks completely contradicts that confidentiality of names is protected under federal law as Officials use age data for things such as forecasting how many people will qualify for Social Security or Medicare.

And with the last 3 questions 8, 9 and 10, the Census really takes the gloves off in analyzing, categorizing and polarizing race specific discrimination opportunities.

Question 8. Is Person 1 of Hispanic, Latino, or Spanish origin?

(Print origin, for example, Argentinean, Colombian, Dominican, Nicaraguan, Salvadoran, Spaniard, and so on.)

The Census explains the question as follows: Federal agencies use this data to monitor compliance with anti-discrimination laws. State and local governments might use it to determine the need for bilingual programs.

Question 9. What is Person 1’s race? Mark one or more boxes.

EXCUSE ME: This question completely catches me off guard. I always have learned the existence of 5 races on this planet: Red, Brown, Yellow, White and Black in any random order thank you very much. What happened? I guess all of us Europeans suddenly became White? Middle Eastern people don’t exist anymore, that includes Jewish people by the way. The distinction between African American and Black or Negro is now what??? And what is the meaning of Mark one or more boxes and the distinction of Some Other Race?
And I strongly object to not seeing one of the oldest races on earth on this list; the Aborigines.

Last but not Least

Reluctantly I move to question number 10
Question 10. Does Person 1 sometimes live or stay somewhere else?

• No
• Yes – Mark all that apply.
• In college housing
• In the military
• At a seasonal or second residence
• For child custody
• In jail or prison
• In a nursing home
• For another reason

The final question is another one to try and make the count accurate says the Census.

Wow. I’m almost rendered unconscious by this arrogance (this cannot be ignorance anymore!!).
To give you an idea of the potential accuracy dilemma that is hiding in this question, check out this:

“I am a 17 year old college kid, living on Campus in Atlanta, but two weeks ago during Springbreak in my parents second residence in Fernandina Beach, I was busted by the cops for underage drinking and they put me in jail with the promise they would lock me up for a long time if caught again. My parents are divorced and mom, who lives in Charleston SC, where most of my stuff is, wants me to go to rehab and dad, who moved to New York, where I stay during the Summers, if not in our condo on St.Maartin, wants me to go into the military. I just happened to be a bit confused by it all, so I decided to crash on my girlfriend’s couch for awhile, but then this Census guy showed up at the front door and wanted to know whether I lived there. Honestly I have no clue where I live.”

It is of course up to each individual to decide whether they trust the government enough to give them all this information, while they are only entitled to the number of people that reside in a home. If you knock on my door there is a sign that says 2. Write it down and leave, because that is all you’re going to get. Because I’m with the Hawaiian’s: Fire Will Never Say It Has Had Enough.

You can of course also follow Christoper Walken’s example of answering the Census questions: