Fish wrapped in Banana leaves with Chile Rajas and Crema 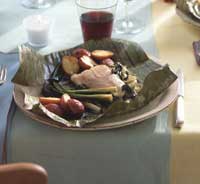 Banana leaf¬†is the leaf of the¬†Banana plant. It is used as a decorative element for auspicious ceremonies in¬†Hindu¬†and¬†Buddhist¬†cultures. It is also used as a¬†plate to serve food in countries like¬†India. Banana leaves though commonly thrown away contain large amounts of¬†polyphenols, including¬†EGCG, similar to green tea.

Banana leaves are predominantly used by Hindus and Buddhists as a decorative element for auspicious functions, marriages and ceremonies in¬†India¬†and¬†Southeast Asia, it is also used for a taste.

This Mexican recipe subscribes to the belief, as do the Indians, that the banana leaf gives a special taste to the food served on it.¬†¬†Rajas¬†is the Spanish word for ‚Äústrips,‚Äù and in the Mexican kitchen it generally refers to strips of chile.

Make rajas:¬†
Roast chiles on racks of gas burners over high heat, turning with tongs, until skins are blackened, 10 to 12 minutes. (Or broil chiles on a broiler pan about 5 inches from heat, turning occasionally, about 15 minutes.) Transfer to a large bowl and cover tightly with plastic wrap, then let stand 20 minutes.

When cool enough to handle, peel chiles, discarding stems and seeds (do not rinse under running water as this washes away flavor), and cut lengthwise into 1/4-inch-thick strips.
Cook onions with salt in oil in a 12-inch heavy skillet over moderate heat, stirring, until onions are tender but still have texture, about 10 minutes. Stir in chiles and cook, stirring, 1 minute, then season with salt.
Assemble fish packets: ‚Ä®Preheat oven to 450¬∞F.

Unfold banana leaves. Cut off (and reserve) tough center rib that runs along bottom edge of each leaf with kitchen shears. Cut ribs into 12- to 14-inch strips for tying packets. Gently cut leaves into 8 (12-inch) squares, being careful not to split them.

Slowly run a banana-leaf square across flame of a gas burner, just enough to ‚Äúmelt‚Äù outer coating on leaf (it will become quite shiny; if you have an electric stove, hold leaf slightly above burner on moderately high). Place a piece of fish in center of square and season with salt, then top with 1/2 cup rajas and 2 tablespoons crema. Fold 2 sides of banana leaf over fish to enclose it, then fold in opposite sides to form a packet. Tie packet with a strip of banana-leaf rib and transfer to a large baking sheet. Assemble 7 more packets in same manner.

Bake fish packets in middle of oven 20 minutes, then transfer each to a large plate or shallow soup bowl. Cut ties of packets and open them (leaves are not edible). Drizzle fish with additional crema.

Cooks‚Äô note: ‚Ä®‚Ä¢ Fish packets can be assembled 2 hours ahead and chilled. Let stand at room temperature 20 minutes before baking.
* Available at Latino and Asian markets.