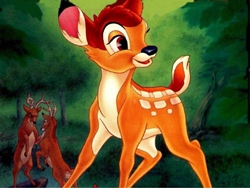 Tuesday afternoon found the traffic in Fernandina quite normal. School had just been adjourned at the Atlantic Avenue Elementary so the caravans and buses loaded with children were making their way home. What was a little odd on this particular Tuesday was the four point 100 plus pound deer dodging traffic and pedestrians along Atlantic Avenue and 14th Street. The deer managed to make its way to #9 North 14th Street, the offices of Nick Deonas Realty. It crashed through their glass front door and began a spree of damaging everything he came in contact with.

The offices were open for business and fully staffed at the time of the incident surprising not only the occupants of the building, but several drivers witnessing the act. The deer first entered the property management office, realizing there was no exit to be found he then headed for the bathroom located towards the rear of the building. After breaking the window and roughing up the place a little he then entered the copy and break room. Here he killed a flat screen television, several pieces of furniture and miscellaneous items.

Nassau County Animal Control responded and sedated the animal so he could be safely removed. The Deer was taken to the Nassau County Humane Society to evaluate his injuries and no update was available on his condition. It is believed he was a full time resident of Fort Clinch and just got curious to see what was going on in town. As for the office and its employees, they all agree when things like this happen in life, its best not to ‚Äúbuck‚Äù the system.