Residents and guests of Amelia Island are pleased to learn they can enjoy traditional southern cooking again at the Florida House Inn. 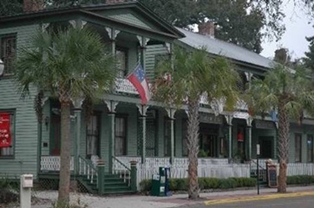 Residents and guests of Amelia Island should be pleased to learn that they can enjoy traditional southern cooking again now that the Florida House Inn has reopened its restaurant. The Inn closed in January 2010 and reopened on December 1, 2010, after being fully renovated.

The dining room will be open from 11:30 am to 3 pm daily and serve all-you-can-eat meals including fried chicken daily and other options that will change daily including pot roast, meat loaf, and pork chops. Seasonal vegetables, biscuits, dessert and sweet tea are included in the meal for $13.95 each. The tables seat 10 and will offer each diner a variety of side dishes. Be sure to come early as seating is first come first served and reservations are not accepted.

The 16 room Inn has hosted many famous people including, General Ulysses S. Grant, Jose Marti, the Carnegies, the Rockefellers, Mary Pickford and Henry Ford. It is listed in the National Register of Historic Places.