Florida’s Tourism and its Impact on our Community

The Downtown Fernandina Post Office, a replica of a Venice Italy Castle, could be turned into one of the much needed attractions for this island. 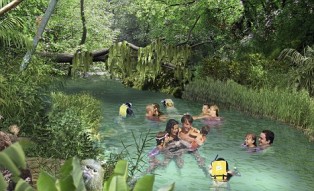 Orlando’s Theme Parks are the biggest tourism attraction in the world with 54.3 million visitors last year. Just 40 years ago Orlando’s number of visitors was right about ZERO. Attractions bring visitors and even though Amelia Island’s tourism has been relatively blessed in recent years, all surveys indicate that we need more attractions.
Even in a faltering economy we have been able to attract a slightly lower but still good share of visitors. In 2010 we scored beyond expectation as a result of the Gulf Oil Disaster and the ongoing misery in air travel caused by over protected security, followed by increased fees, ticket prices and capacity adjustments, which has made many more people choose car travel as their transportation option for vacations and family get-a-ways. Naturally within easy driving distance of some major Metropolitan populations, Amelia Island has been able to carve out a nice and steady  presence with a remarkable 3.6 return visits. But the future might demand more that we’re offering right now. History and culture offer great attraction potential, so does anything offering water attraction, both fresh and salt.

During a recent Tourism Development Council presentation at City Hall, elaborating on the numbers scored in the third quarter of 2011, it showed that even though we attracted 7,700 less visitors than in the same period of 2010, the 112,500 visitors that stayed with us last quarter, spent a little more than the ones last year, so that the economic impact only showed a 3.3% drop. And that should be a feather in the hat of the TDC in these tough times.

A more in depth study into the numbers of this Visitor Profile Report, further reveals where our visitors come from. Two out of three visitors originate from the Southeast including Florida, which obviously coincides with he fact that three out of four report to arrive here by car. For policy reasons this is an important indicator for future infrastructural needs. For example a rudimentary calculation reveals that between July 1 and September 30, besides local traffic, our roads were used daily by an estimated 1,500 cars belonging to visitors (the calculation includes % of visitors coming by car -average 3 per car- multiplied by the division of 90 day period divided by 4.6 days average stay). Why is this important? Because if all these 1,500 cars decide to show up in downtown on one particular morning, traffic will be demonic and there won’t be enough parking spaces for miles. It is also important to re-analyze parking meter impacts in a hard reality scenario. Like anyone living here I love the fact that visitors are not nickeled and dimed to death, as long as we are not treated as the ones who need to support the financial picture of the City.
1,500 cars multiplied by a very reasonable $5 a day, multiplied by 365 days, may just be enough to take a loan out to renovate the old Post Office on Centre Street into a multi functional attraction and pay the debt service for some much needed attractions. With the Postmaster General posting a $5 billion debt yesterday and a clear warning for an upcoming bankruptcy, I think we should be pro-active on the future of that magnificent building in downtown as US Postal Services will wash its hands of it.

OMNI Amelia Island Plantation believes in this island and its future as a tourism magnet. Sure at $69 million, they got the Plantation in a bargain deal last year, but to allocate $88 million dollars for renovation and expansion in this still sputtering economy, reveals longterm vision and confidence; vision and confidence that this island needs to match, rather than assuming a small town mentality  and cower in a corner about something as important as Forward Fernandina. I’m not saying that everything in the FF plan meets my or your personal wishes, but how could it ever. You are you and I am I and we have different realities, wish lists, perceptions and backgrounds.

The only thing we really do have in common is a love for the island and the lifestyle it affords us. And when studying numbers that display what our visitors like about our island and/or find lacking or missing, I see two areas that need immediate addressing for the future of tourism here on island.

One: less than one out of ten visitors is impressed by our attractions and
Two: only one in six visitors says they enjoyed our nightlife

Obviously these two issues are surrounded by opposing emotions as has been shown in the past, but that still doesn’t eliminate the need to address these topics adequately for a successful future as a tourism destination.

The Need to Have a Vision for the Future

Amelia Island is in dire need of a number of small/mid-scale, sustainable attractions for the future of its tourism economy. From a strategic AND interactive planetarium to an interactive pirate museum, an interactive car museum, a water park with giant surf waves, an artificial snow ski piste, a boulodrome, and so on are options. The world is full of successful examples. I saw one about 6 years ago when I lived in Kenosha Wisconsin for a short 9 months. The attraction was a 35 minute Toy Train tour through the warehouse of the Jelly Belly Bean Company.  The company has been doing this for decades every day of the week from 9am to 4pm. Imagine how many hundreds of thousands of people have visited this simple attraction.

Fifty years ago, Orlando Florida did not mean anything to anyone in the world and for those who knew about it, it portrayed a mosquito hole in the central Florida swamps. Not until Disney opened in 1971 and SeaWorld 2 years later, would anyone go to Orlando for a vacation. Orlando’s hot tourist market which drew a record 53.4 million visitors this year despite the weak economy is expected to heat up more than ever with a new theme park that will make visitors feel they’re in the ice fields of Antarctica.
I know I’m taking a giant leap here, only for the purpose of explaining why our big attraction to the South called Orlando is today the hottest tourist market in the world. Orlando did not follow the market, it created the market. The companies that operate Orlando’s Theme Parks teach us where travel, tourism and entertainment is going. They are the masters of marketing and not looking at them for some type of guidance towards the future of tourism here, is economic suicide.

Earlier this week Sea World’s “Empire of the Penguin” was announced to open in 2013 . Backers of the almost 40-year-old Sea World Corporation in an area that has become the world capitol of theme parks, say it is a move to further solidify Orlando’s position as the No. 1 tourist destination in the world.

The unveiling outlined three additions “designed specifically for this park and the market. You can’t see them or experience them anywhere else on the planet,” said Brian Morrow, creative director.
The new park will feature an entire section of shops and restaurants with an interactive ride at its center. Tourism observers compare it to the wildly successful Harry Potter attraction at Universal Orlando, according to AP.
Parts of the experience will also include a radical (but unspecified) temperature change that chief designer Morrow says will create “the coldest attraction ever constructed.”
Dennis Speigel, a Cincinnati-based theme park consultant, told AP that SeaWorld’s expansion is “a big move on their part. It follows suit with what Universal did with Harry Potter and what Disney is doing with some of their properties. A manatee and sea turtle exhibit in a domed 3-D theater, the chance to wade and swim next to Asian otters and marmosets, and a penguin experience that promises to immerse tourists in the middle of Antarctica will be on hand at SeaWorld Orlando over the next two years.
SeaWorld’s “TurtleTrek” exhibit, with tanks of live sea turtles and manatees and a domed theater featuring computer-generated 3-D images, will open next spring. Also launching next spring: a “Freshwater Oasis” at SeaWorld’s adjacent swim-with-the-dolphins boutique park, Discovery Cove. That attraction will put visitors in a clear spring under a rainforest-type canopy of trees to wade and swim next to Asian otters and marmosets.

I think it’s very timely and smart for SeaWorld Orlando to undertake this huge investment in a weak economy. It is typically anti-cyclical, which means that labor is cheaper than in boom times, better material pricing and construction contracts can be negotiated, even borrowing money is cheaper than in a booming economy. 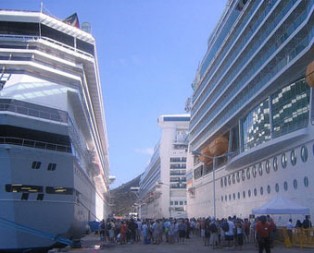 6 Mega Cruise ships drop 25-30,000 people in Philipsburg St.Maarten every day. Most buy a Coke and use the bathrooms while eating and shopping aboard ship. Talking about a night mare.

The numbers already show that Amelia Island has several solid attractions to further expand its tourism industry on. The beaches, the historic downtown area and a substantial number of crowd attracting Festivals have proven their values. I hope that the island’s population and newly elected city government can look beyond the length of their noses, to see what the island’s future needs in terms of sustainable attractions. Anyone out there who remembers the New York Experience in the McGraw Hill Building on Fifth Ave in New York City? “The New York Experience” was a 55-minute multimedia, shock-and-awe extravaganza that showcased all the things that make Gotham great. From its early history. It ran from the early 1970s to the late 1980s and if McGraw-Hill would have had a little more on its greedy mind than wondering at what point Standard and Poor would become a millstone around their corporate neck, there would have an impeccable interactive, highly entertaining history of the city for millions to enjoy. Something like the New York Experience for this island that had far more importance to the birth of the United States than St.Augustine or Pensacola, would be a perfect marriage for the statuesque Replica of a Castle in Venice Italy on our Centre Street, that was always wasted on being used as a Post Office.

We need decisions now, or else the future of our picturesque Historic Downtown could be defaced by the economic need in the future to allow Cruise Tourism to come on shore. And if you need an impression of that nightmare click Here.