Travel: the art of being alert, relaxed, prepared, up to date, in constant contact and lightly packed. Here are some helpful tips. 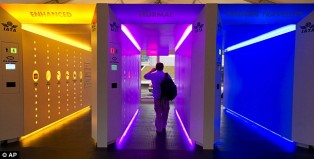 Are you being Served?

It doesn’t look like air travel is going to be any smoother in the future. While manufacturers of airport security equipment were showing off their new inventions that will eliminate the need to take off shoes, remove nail clippers or laptops from carry-ons at the Aviation Security World Conference in Amsterdam last week, lawmakers in Washington were trying to figure out how to make it easier for foreign nationals to visit the US. And while the HLS/TSA, our national security watch dogs, are moving its headquarters into a renovated castle-like structure that opened in 1855 as the Government Hospital for the Insane, Americans are also becoming increasingly paranoid about their safety while traveling.

With Mexican drug killings, recent unrest in the Arab countries, natural disasters in other parts of the world, most travelers could be forgiven for worrying about their safety vis-a-vis acts of terrorism while away on vacation. But the truth is if you are worried about getting back home alive, forget terrorism as a factor. Terrorism is very much less likely a cause than a car or swimming accident. Actually the numbers are incomparable. The odds of a traveler abroad being killed by any act of terrorism are about 1 in 12 million versus 1 in 45,000 chances of dying in a car wreck. Another even more sobering statistic? You are three times more likely to commit suicide while abroad than be killed by an act of terrorism.

Yet terrorism influenced security budgets devour a lot more money than can be justified by the reality of facts. Looking at the new security tunnels as presented during the Security Conference in Amsterdam, profiling is not even an issue of ethics anymore, which honestly I always considered a waste of time, because we humans profile every single moment of the day, always have and always will, because that’s how our brain is wired. So with that out of the way, security experts came up with the idea to build three levels of technical and chemical interrogations, done by a machine. If you are a known traveler with a longstanding record, you quickly move through the blue tunnel with your shoes on, your coat on, your carry on with you and obviously just a light dose of radiation. You’re one of us. Have a nice flight.

The next person is not a frequent flyer, but once or twice a year gets a whiff of the world and jumps on a plane. Well no, first you have to fill in your flight plan so to speak with the various justifications and declarations, preferably way ahead of your flight. At the airport you will be guided into the NORMAL tunnel and supposedly be on your way.
And then there is the enhanced security risk passenger. Flies once in a blue moon, mostly because family lives at car trip distance and his work is a 30 minute commute. The only dream he or she has is a honeymoon to St.Maarten in the Caribbean. Well after having answered all the questions on the form that was required to be filled out long before the flight could be booked, the days of the trip arrives and he or she finds out that some of the answers were wrongly interpreted by the less than smart TSA employee who thought that St.Maarten was right next door to St.Simon’s off the Georgia Coast, instead of a small nation island in the Caribbean.( Don’t laugh or shake your head, I’ve heard it dozens of times!) Long story short, the once in a blue moon traveler is condemned to walk the ENHANCED TUNNEL, injected with radiation, chemical smoke, detection and send back to do it once again, because the TSA person was temporarily distracted and forgot to watch the screen. Granted I exaggerate, but I cannot tell you my dear reader, the stupidity I have encountered over more than a thousand flights I have been on over the last 40 years. Airlines may think that this tunnel system will be to their benefit, after all the more you fly, the more you become profiled as a known traveler, ergo preferred, but reality is that technology when it works, it’s great, but when it doesn’t work it creates headaches larger than life.

Five Things to Watch For While on Vacation

The answer to terrorism security is more a matter of balancing the threat against the reality. And the reality according to Forbes Magazine, our national provider of top listed anythings, is that terrorism is not even on the radar of the five biggest dangers for travelers.
The dangers facing most Americans traveling abroad are far more mundane and usually preventable, according to Forbes Magazine and gives the following five top tips to avoid trouble.

1.    Most crimes in violent cities tend to be concentrated in specific neighborhoods. Check friends and associates or social media for areas to avoid. If you really want to be secure, check the local police department.
2.    US hotels require smoke detectors, sprinklers or both. Many overseas hotels, and especially older ones in removed areas, have neither. Stay in a Western style hotel that adheres to international standards, he advises.
3.    Some of the most common mishaps involve petty crime or crimes of distraction such as pickpockets. Avoid ground floor rooms where thieves or even worse offenders have easy access. Also, avoid floors above six or seven because many fire department ladders can’t reach them.
4.    Slips and falls are among the most common problem for travelers. So simply watch out for slippery surfaces in hotel bathrooms.
5.    Watch your diet. How is this helpful? Water-borne illnesses (particularly stomach ailments) are common in developing countries. One rule: if you can peel it, you can eat it. Avoid street food to be safe, however.

Another website called OneBag.com, a self-described site on “The art and science on traveling light,” claims that overpacking tops the list of biggest travel mistakes. The site also features safety suggestions that I have learned over the years to be true and on the mark.
It says there are three variables when thinking of safety and security: individual circumstances, areas of travel, and personal perceptions:
Individual Circumstances: “Generally speaking, a woman is more at risk than a man, a weak person more at risk than a strong one, and a tourist more at risk than a local; these are things that we can do little about, other than recognize them as risk factors and adjust our expectations — and preparations — accordingly,” the site says. Paying attention to your surroundings always helps, the site says.
Areas of travel: Keep up with changing political winds in countries by checking consular offices, for example, about the latest in any political unrest or travel warnings.
Personal perceptions: The site advises taking the time and trouble to investigate the real and updated risks of any country you are looking to visit. “An example: the concerns that many have about terrorist aviation threats are, quite simply, irrational,” it says. However, “Few people these days take the trouble to educate themselves as to the true nature of any risks presented by the various scenarios that are being sold to them.”

With today’s social media access to any corner of the globe, the smart approach is to check with people who have recently (like a couple of days ago returned from the same spot you are visiting). It’s a bit like how pilots warn eachother while passing midway, about quickly changing weather conditions and wind shear. Go on Facebook or Twitter. Dig a little and be prepared.