It has been whispered for months. Foreclosures are coming to halt because of shoddy court filings. 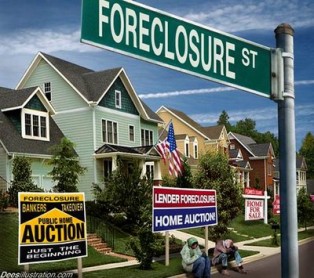 A further chilling in the housing market

The rumors have been around for almost 2 years, and with Bank of America now joining the growing number of mortgage lenders that are freezing their foreclosure actions nationwide, the housing market is getting another blow it can ill afford.

The culprit? Human laziness or more accurately a very inadequate preparation of the required foreclosure documents, at least in those 23 states where law requires accuracy of the documents.

It turns out that Three major mortgage lenders — Bank of America, GMAC Mortgage and JPMorgan Chase — have said they are suspending foreclosures in the 23 states where they first need a judge’s approval. They are also waving off Fannie Mae from selling any of the foreclosed homes whose loans they sold to them.

Nobody involved is revealing any numbers yet, but considering that BofA across the board decided to halt foreclosure processes indicates that we are talking large numbers. Especially here in Florida where an estimated half a million or more properties are in the various stages of foreclosure, this moratorium is clogging the pipelines of homesales further.

To get a better perspective of the effect, about one third of the current sales in the housing market comes from distressed properties, large numbers of which are in foreclosure.

A snapshot of the problem shows that most mortgage lenders sold their mortgages to Fannie Mae during the height of the crisis, which created another layer of financial mismanagement, after the original papers had been packaged, re-packaged and resold across the globe several times by the original swaps. Now it is up to Fannie Mae to send emails to real estate agents about putting off deals and removing houses from the market and nobody knows how long this is going to last, because the same people who delivered shoddy and questionable paperwork are the ones that need to review it. Current estimates say 30-90 days but considering the enormity of the numbers there is no way to be sure.

Agents and buyers are caught up in the process that puts them in limbo.
In addition, the side effect of this scandal can, and most probably will be enormous as homeowners and law enforcement officials in many states are emboldened to question whether lenders rightfully hold the notes underlying foreclosed properties. And what about those where people were illegally foreclosed on?

It looks like the housing market is looking at a chilly winter with a great number of uncertainties for distressed owners, potential buyers, agents and brokers and title insurers who are discussing how to obtain warranties from lenders against errors in their foreclosures. For them there is a brand new risk that has to be evaluated, now that is not at all clear if courts across the country are going to be reversing their earlier decisions on foreclosures.

Sound advice is, that if you want to exercise your inalienable right to “go on with your life” and have the means and/or credit to do so, contact a good realtor/agent, whether you’re a buyer or seller. Don’t go thinking you can do it yourself in this market, because there are too many question marks to deal with.