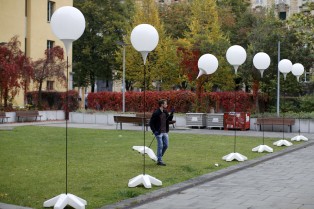 Where Once was a Wall is now light

Several months ago Angela Wallace Pierson of Wallace Pierson Travel (formerly The Travel Agency) and myself started working on an idea for a Benefit Concert for Ritz Carlton, Amelia Island’s Executive Chef Thomas Tolxdorf, who sadly passed away in a car crash on June 7 this year.

The day we finally chose was Sunday November 9, in commemoration of the fact that 25 years ago on that day, the Berlin Wall came down. Chef Thomas was born in East Berlin in 1965, four years after the Wall was erected and cherished the day in 1989 the wall came down and his journey to becoming an internationally recognized chef really began.

The concert is performed by local band Island Vibe with a little help from well-known musicians Chris Kellam and Blistur, Jennifer Burns, Jay McPerson and others at The Green Turtle in downtown Fernandina Beach.

With the help of monster guitarist Chris Kellam and Blistur, the Fall of the Berlin Wall will be commemorated with some Pink Floyd covers, while Jennifer Burns will attach her magnificent voice to a selection of well and lesser known hit songs. Jay McPherson will treat us to some good old Allman Brothers tunes, while other local musicians will sit in as Island Vibe runs down the list of some of the most popular tunes of the sixties, seventies and eighties. The program that kicks off at 3pm also includes several auctions and raffles and offers free food.

The auction items include gift certificates for free hotel and b&b stays, dinners, liquors and spirits, a signed guitar and other valuable mementos and objets d’art. Raffle tickets can be purchased at Wallace Pierson Travel on 14th St/Courson, the Green Turtle and the Luxury Travel Show at the Ritz Carlton, Amelia Island on November 8.