The Magic Kingdom covers 107 acres with themed "lands" and plenty of rides and attractions including Cinderella's castle. 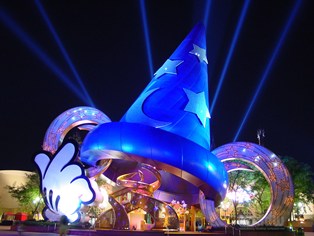 Walt Disney World is helping you save money by offering you a FREE admission ticket to any of their four amusement parks on your birthday! For all of 2009, if you plan to visit the park on your birthday, with proper ID, your ticket is free.

The Magic Kingdom covers 107 acres with themed “lands” and plenty of rides and attractions including Cinderella’s castle.

Epcot is a theme park with a World’s Fair atmosphere and it is twice the size of the Magic Kingdom. The amusement park focuses on science, inventions and technology and features a variety of countries celebrating their culture, history and cuisine.

The Animal Kingdom is so much more than a zoo! Visitors experience excitement and thrills beyond the imagination with rides, shows and of course, animals.

Disney-MGM is all about making movies with replicas of a New York City Street back lot and 1930s style Hollywood and Sunset Boulevards.

Besides a free ticket for your birthday, if you are a Florida resident, the park also offers special pricing on tickets and rooms. It has been a couple of years since I’ve packed the family into the car for a trip to Disney, and with discounts and birthday specials like these, you don’t have to be a celebrity or a famous athlete to shout, “I’m going to Disney World!”