Gala of the Royal Horses Review

I guess I should have bought the souvenir program; the woman who sang a variety of numbers throughout the show had a fabulous voice 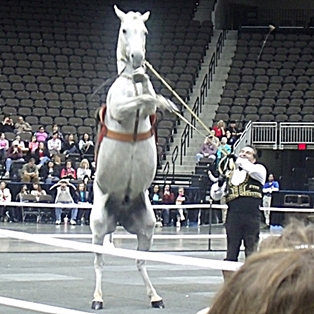 The Gala of the Royal Horses presented Lipizzaners, Friesians, Andalusians and Arabian horses in a culturally interesting tribute.

I was there to witness this inaugural occasion when riding Master Rene Gasser, creator and producer for “Gala of The Royal Horses” brought his world-renowned equestrian tour to Jacksonville, Florida, February 9, 2014.

For seven generations, his family has put together shows that have only been seen at the famous riding schools in Vienna and Spain.

The horses were smaller than I imagined and that likely contributed to their ability to kick in a variety of directions on command. They appeared well mannered, with the exception of one young horse who had his own ideas about how the show should be performed, which simply added more charm to the event.

I guess I should have bought the souvenir program; the woman who sang a variety of numbers throughout the show had a fabulous voice. The audience was small, but at $56.00 plus tax, per person, they likely made a nice profit because they had a very small cast of about ten horses and riders, two musicians, an emcee, three helpers and a sound man who should be re-trained or re-placed. 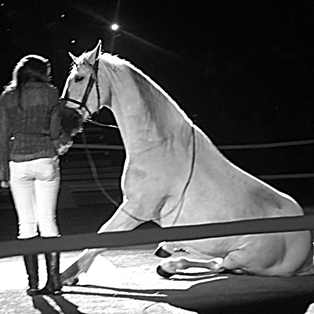 One of the most beautiful moments was when a female rider’s white Lipizzaner behaved more like a beloved house pet. Sitting, and then lying on the ground with the girl.

The Royal horses of Europe are some of the most celebrated in history and this performance celebrates the tradition, athleticism and graceful beauty of these magnificent creatures.

Along with the magnificent stallions, a Spanish flamenco dancer shared the floor with a dancing horse! She wore a vibrant costume and the pair was accompanied by live guitar and vocals. All in all, the show was absolutely worth the money, the drive into Jacksonville, and a couple hours on a Sunday afternoon.

See more pictures on our facebook page by clicking HERE!

For the last ten years Rene had been touring both in Australia and abroad with his various productions, which include Gala of the Royal Horses, Lipizzaner’s With the Stars, Equestra and El Caballo Blanco.