Game of Petanque is Expanding on Amelia Island

As the city and the island come together Petanque is embraced into our unique island lifestyle and culture. 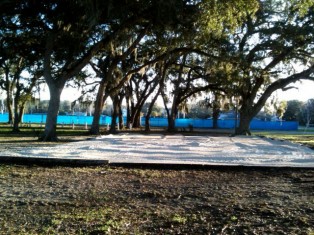 The popularity of the old French Ball Game of Pétanque is growing rapidly on Amelia Island.
Introduced to Amelia Island and Fernandina Beach less than 3 years ago by Philippe Boets, who moved his company Pétanque America from North Carolina to the island and started organizing The Pétanque America International Open Tournament that has brought many players from around the nation and the world to our island since.

Soon after the first tournament in 2009, we saw Pétanque Courts appear around the island in private yards and outdoor restaurants. Some of the housing communities are now making space for courts to play this wonderful game and even resorts are picking up on the growing trend.

The City of Fernandina Beach has been an enthusiastic supporter of the new game and gracefully provided a number of courts to the local Petanque Club down at the waterfront marina year round and has now expanded that support with several new courts right in Central Park on Atlantic Avenue. 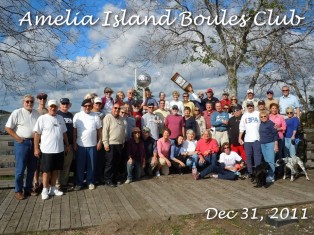 It’s good to see this century old Southern French game take hold so rapidly on this island, which is what Philippe Boets already said when he first visited here in January of 2009. Amelia Island and Fernandina Beach just felt right. With the local Pétanque club already reaching 60 member players and scoring quite nice during the recent international tournament in November, the future looks good for the game.

If you want to try it out, the club plays Wednesday nights (5pm -) and Saturday mornings (8:30-) near the Boat trailer parking lot at the River Downtown, but don’t be surprised if you catch players at Café Karibo or Central Park or any of the private courts around the island.
You can friend the Amelia Island Boules Club on Facebook and learn about this sport for all ages or you can go of course directly to “la bouche de cheval” Philippe, who can set you up with the right equipment to join in.