Community Events, In the News, Sports

Special reserved parade seats are available for New Year's Eve and they will allow you to watch the parade in style! 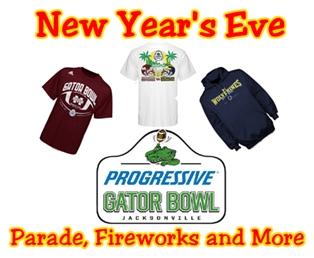 The Annual Gator Bowl Parade is December 31, 2010 in downtown Jacksonville. Once again, the Fernandina Pirates Club will be appearing in this televised event. Marching bands, professionally detailed parade floats, beauty and scholarship contestants, giant helium character balloons and of course pirates will march along the St. John’s River, beginning at 3:00 PM, in preparation for the Progressive Gator Bowl to be held on New Year’s Day at Everbank Stadium. 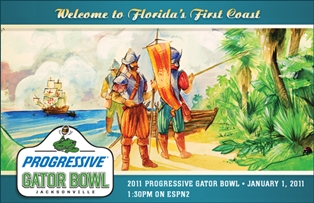 “Michigan and Mississippi State are truly among the greatest of football traditions in the nation. The Wolverines and Bulldogs will provide one of the most exciting and emotional games of the Bowl season and we are looking forward to welcoming both teams and their fans to Jacksonville for this great New Year’s Day matchup,” said Gator Bowl Chairman Stephen Tremel.

Special reserved parade seats are available for New Year’s Eve and they will allow you to watch the parade in style! The reserved seats will give you a comfortable and up close view of colorful floats, exciting specialty units and marching bands from across the country. Parade Bleacher Seats can be purchased on the day of the event at the Bleacher Seating locations at the corner of Water and Pearl street.

The 66th Annual Gator Bowl will be played on January 1, 2011 at 1:30 p.m. in Jacksonville, Florida at EverBank Field and will be televised nationally on ESPN2. More information about tickets and Bowl information are available online at www.gatorbowl.com.

Other events for New Year’s Eve include the SEC vs. Big Ten: The Battle for Band Supremacy, presented by Aetna, at 6:00 PM on Coastline Drive between Market and Liberty Streets and of course along the waterfront and even the Jacksonville Landings makes a great spot to view the Fireworks Show at midnight!