Germany crush Argentina (4-0) while Spain are the lucky ones to advance over the Paraguay team (1-0) to the semi finals World Cup Soccer in South Africa. The Dutch will meet Uruguay in Durban while the Germans will battle the Spaniards in Cape Town to reach the Finals in Johannesburg on July 11. 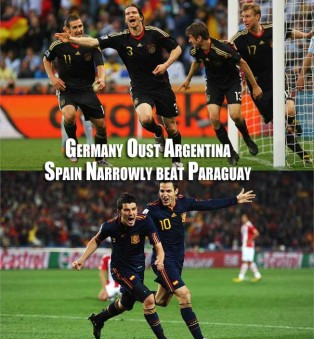 What seemed on paper to be a thriller that could could go either way, became a well deserved “walk in the park” for the superior Germans crushing Argentina 4-0. Under the watchful eye of German’s enigmatic Chancellor Angela Merkel “Die Mannschaft” cleverly outplayed the Argentinians under the leadership of coach Diego Maradonna. A very early goal due to passive defending from the Argentinian side, who seemed to dream already of a Semi final place, set the stage for Germany’s preferred counter attack soccer style. It served them well since all three additional second half goals were scored in masterfully executed counters that frazzled the Argentinians beyond their own belief. The disbelief of defeat was written all over Maradonna’s face, who had hoped to lead his team into soccer glory like he did in Mexico in 1986.

In the last remaining Quarter Final between Spain and Paraguay the Del Bosque “torreadores” could only thank their Goal Keeper Iker Casilles for not being ousted and send home in a “punch and counter punch” game that never reached any top quality until about the 60th minute of the game when Paraguay’s first corner kick “forced” Gerard Pique to wrestle Oscar Cardozo to the ground. A Penalty kick. The fouled man, never a good idea, could not get past Cassilas who sensed the location of the penalty drive. One minute later Spain was awarded a penalty on the opposite side (it seemed the referee was in the mood to set finally some fire into the play). Xabi Alonso buried his spot-kick but Spanish joy was short lived, with a retake ordered for encroachment. This time goalkeeper Villar dived low to his left and parried Alonso’s effort, and Paraguay scrambled the rebound to safety. Finally 7 min. before time Pedro after an unobstructed drive hit the Paraguay goal post and the rebound landed in David Villa’s foot who managed to hit the right inside post bouncing to the left inside post to finally drop behind the line. 1-0 for Spain in a game that could have seen either side go through to the semi finals.

Most astounding is that at the beginning of the Quarter Finals 4 South American Teams (Uruguay, Paraguay, Argentina and Brazil) were vying for a place in the Semi Finals with 3 European sides (Germany, Spain and the Netherlands) and one African country – Ghana. Imagine that Ghana in the 122 st. min. would have converted their penalty kick, none of the Latin American representatives would have made it into the Semi finals. An absolute novelty.

Although Holland and Germany still need to pass the hurdle of Uruguay and Spain respectively, there is a good chance that these “neighbors” will meet again in a repeat “face-off” of 1974 but on African soil. Should this final become the closing of a remarkable South African World Cup Soccer tournament, the Dutch have a mistake to correct that Johan Cruyff and Johan Neeskens made by underestimating the German resilience. Today Argentina became victim of such underestimation and it should be a warning that Germany is set-out to prove that they are, even with a very young and inexperienced team, the new generation of soccer greats to beat.