Giant tiger shrimp show up in Fernandina Beach. This aggressive and invasive species is causing alarm for wildlife experts. 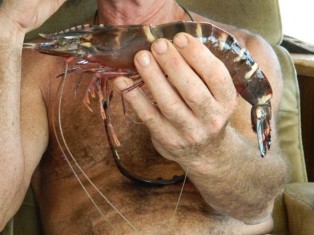 Fernandina Beach is the birthplace to the modern shrimping industry, a dying industry it appears if you count the few shrimp boats left in our harbor.

Recently, giant tiger shrimp have begun showing up in local nets. These are an aggressive and invasive species that is causing alarm for wildlife experts.

Native to Southeast Asia and Australian waters, the flavor of these invaders, when cooked up by local fisherman, were sweet tasting, like lobster, but could wreck havoc to our popular, local white shrimp.

What could happen if these shrimp populations continue to grow in our local waters? One marine biologist we spoke with said, “This could change the shrimping industry as we know it. If this is an aggressive and invasive species, it could take over the population of the local shrimp you are used to.”

How Shrimpzilla (coined by Gary Patrick, a Georgia fisherman who caught a foot long tiger shrimp on September 15, 2011) found its way to Fernandina Beach is not known. One report suggested they may have washed out from an aquaculture farm in the Caribbean during recent hurricanes.

After speaking with local shrimpers, it turns out they have caught these monster shrimp occasionally over the years, but they have never been seen in such abundance. One source told me that captains have been bringing in Shrimpzilla as far north as Myrtle Beach.