The Gin Blossoms will play a FREE concert at the 2016 Isle of Eight Flags Shrimp Festival on Saturday, April 30th. 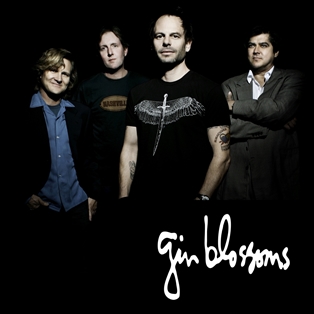 The Gin Blossoms will be headlining Saturday’s entertainment at the 53rd Isle of Eight Flags Shrimp Festival in Fernandina Beach, Florida, and will take over the Riverfront Stage on April 30, 2016, at 4:30 p.m. This free concert will have you dancing and singing along to popular hits from the 90’s such as “Hey Jealousy,” “Allison Road,” “Until I Fall Away”, and “Found Out About You.” While grunge and hair band genre superstars were taking over the airwaves, the Gin Blossoms emerged with a lighter than alternative rock sound known as “jangle-pop” and found homes in four different radio formats rocketing the band into success, and a fan favorite on MTV.

Taking their name from a caption on a W.C. Fields photo, the Gin Blossoms have toured over 25 different Countries including a five city tour of Iraq in 2010. “It was so much fun to entertain our troops. It’s really insightful to see firsthand how our troops live in a combat zone. It really helped to broaden my understanding on the sacrifices they make to protect us at home and abroad. I hope all Americans understand how important it is for us to extend our thanks,” says Robin Wilson, lead vocalist of the band.

The bands fusion of Pop, melodic rock, Folk and Country elements took the airwaves by siege, making the band an MTV playlist hostage for almost a decade and the group a natural 90’s mainstay. From their breakout album through today, Robin, Jesse, Bill and Scotty have sold over 10 million records and are one of the most in demand bands. “We’re entertaining and we have chops,” says Wilson, “but it really comes down to the songs. The reason we’re still here is that we have good songs. When young musicians ask me for advice, ‘what’s the best thing to do to further my career’, I always say, ‘Write good songs.’ It always comes down to that.”

The Isle of Eight Flags Shrimp Festival kicks-off Thursday, April 28th with a 6:00 p.m. Pirate Parade in downtown Fernandina. The festival is open from 6:00 p.m. to 10:00 p.m. Friday evening with a dedicated Kids’ Fun Zone at Central Park. Amelia Island’s riverfront welcomes Chicago Blues with a performance by the son of Muddy Waters, Mud Morganfield. You can also enjoy food booths, a tour of the Georgia Bulldog shrimp boat, marine displays, sponsor booths, the Miss Shrimp Festival Pageant, a Pirate Invasion, Fireworks, and Gitlo Lee – the Blues Man of the South.

Saturday’s hours are 9:00 a.m. to 6:00 p.m. and nearly 400 vendors will display fine arts and crafts, and antiques. There will be contests, Pirates, an incredible line-up of entertainment, and of course, plenty of shrimp cooked lots of different ways. The festivities continue on Sunday from 10:00 a.m. to 5:00 p.m. with the Laying of the Wreath Ceremony, the Blessing of the Fleet, and a Best Decorated Shrimp Boat Parade.