Gold and Other Unusual Signs of our Times

All the traditional ways of measuring the state of the economy seem to be about as useful as a bottle of suntan lotion in a blizzard. 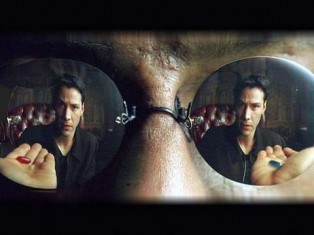 Which pill colors your point of view in today's matrix

With gold going through a “correction” at $1,656.10 today and the faint of heart panicking once again, it is at least interesting to analyze the economy through the lens of some unusual indicators.

But first to all you cry babies with gold deposits: Get a hold of yourself and top off your gold reserves with some more shiny metal at a better rate. None of the fundamentals have changed in recent weeks or months that led to gold’s rise. Ask yourself if anything at all has changed from a macro-perspective on “tangibles”. Has our sovereign debt been vaporized? Is Greece any further away from default, now that the Germans are increasingly disapproving their leader’s support for Greece? Is the Chinese economic bubble any sturdier, or is it still leaking air? Has Japan, the world’s largest sovereign deadbeat based on the ratio of government debt to GDP, done anything to alleviate its crushing financial and demographic challenges? If your conclusion is, well….nothing has changed, than you got your answer.

So why did gold correct this week? As acceptance of a long term economic downturn grabs a hold of investors around the world, commodities are considered at risk and are being thrown over the side by those without a solid grasp on the fundamentals. My suggestion: Stay cool, calm and collected because you may be able to buy more gold at better prices and, and for latecomers to the game, to average down.

It seems we now have passed the line to a Matrix-like world where actual and virtual realities are interchangeable. No need to actually do anything to solve problems, but rather just script a make-believe solution in the media, announce it to the world, and the matter is done…until the next curve in the road.

Wall Street has been doing this for a long while and the Swiss recently did it, by promising to buy euros in endless quantities in order to keep the Swiss franc from strengthening past the 1.20 euro mark. The market apparently bought it, even though in reality, the “solution” is impractical for any real length of time.
The same applies to the Feds promise to keep the interest rates around 0% through at least 2013. Living up to that promise will require the Federal printshop to ink up some $2 trillion in funny money. We have reached the point where “pretend solutions” may no longer do the trick however.

We may have reached the point where real life scenarios tell us more about the state of the economy than anything Washington or Wall Street wants us to believe. Already since the recession of 1993 have we known that we should have more faith in non-standard economic indicators as a substitute for official figures, which have proved all too fallible time and again. Here are some lesser known economic indicators that reveal the state of the global economy and what to look for as signs of improvement.

The Attraction to join the Military
There are numerous examples in our little Kingsland to Jacksonville region of the country how young men and women try to escape unemployment by applying for military duty. Nothing however reveals the economy like the Marine Advertisement Index which shows how the Marines toughen up their recruitment videos to scare off potential recruits, when too many applications have been received and it’s time to slow down the attraction. By the way, all the military services has been exceeding its recruitment quota, even the army, which struggled just a couple of years ago when the economy seemed strong.

Garments and Apparel
Harsh economic times seem to drastically alter people’s psyche in the area of garments and accessories. Neck ties for example not only get skinnier and less colorful in a bad economy, sales of ties shoots up dramatically as well, as men seem to want to express to potential employers that they are willing to work hard.
Men’s underwear is apparently another indicator as sales drop substantially during economic hard times. Industry observers compare it to driving your car another 10,000 miles before trading it in?!
The hemline index has already a long established history since the 1920 as skirts get longer in economic downturns and shorter when thinks look up.

Lipstick Sales Doubled in the recession following 911
This one is a long tested indicator, as is the fact that movie visits and popcorn consumption see a major upswing when the economy is down. Women turn to lipstick instead of more expensive indulgences like handbags and shoes during the rough times, or….they still get these items at bargain prices from pre-owned redistribution websites like eBay, Craigslist, Amazon and others. In the world of movies, 2009 was the best year ever. That should say enough.

The Second Hand Car Salesman Indicator
This one has actually two components. One is the speed of discounting and the other one is the speed of closing the deal. Since 2008 discounts have increased dramatically and I have heard many stories in recent years of driving off a car lot within an hour. Obviously a supply and demand scenario, but one dictated by the buyer’s market syndrome of a weak economy.

Beer and Baked Beans
Consumers move to canned goods to save on food expenses during hard times. Baked beans are a classic recession food staple, while organic foods loose a lot of customers when the economic goes down. Supermarket budget (store) brands are up 25-30% as people are substituting on a large scale. From 2008 through 2010, employment in the beer industry fell 12% versus 2% for Europe as a whole, as people try to save money by drinking at home. The other side of the coin? This is costing many jobs in the hospitality industry and severely depressing tax revenues. In Europe 260,000 people lost their jobs in the hospitality industry in recent years because of this.

Imagine having your hair dresser cut your hair shorter so you can save money over time through fewer salon visits. Not entirely a foreign concept of course, because it seems logical that during flush times women are more likely to get their hair cut, dyed, and groomed more frequently. Actually L’Oreal, the world’s no.1 hair dye manufacturer, saw the sales of its hair color products surge some 30 percent in a year, concluding that women in a recession buy unusual dye including red and copper while metallic colors soared 47 percent. A beauty specialist said people seek to escape reality in a recession, and dyed hair offers a kind of fantasy image. I wonder if the same applies for dog grooming salons where you shell out an easy $45 for your pooch every time you walk in.

Infidelity and Prostitution Benchmarks
Extramarital affairs and the price of prostitution are telling us that there is still plenty of economic trouble ahead. British website illicitencounters.com counts 617,055 users in the UK up from 300,000 just 2 years ago. The Web site crunched its traffic and membership numbers and found that there was a big increase when there was a turning point in the FTSE-100 index, which measures the leading companies listed in London. When the market collapses, people plot affairs. And when the bulls rage, the same thing happens. When it is trading sideways, they stick with their partners.
Also in countries where prostitution is legal, the economic downturn has led to a 2/3 price collapse and an 30% increase of supply.
No chance to get this type of indicators here in the US, but this benchmark may well be a valid way to get a snapshot of the economy. If prostitution was legal in all countries, it would probably make a good index for central banks to track.

The Hot Waitress Index
This one is a little disturbing as it is wrong on all levels of discrimination, but even I cannot deny the underlying premise: The hotter the waitresses, the weaker the economy. During our recent vacation to New York and Washington, we were driven by numerous cab drivers who could have fit the Overeducated Cabbie Index profile. Smart, well educated and on top of their ambassador/historian game, as in my opinion a career cab driver should be.
In a bad economy the “in demand” index shifts dramatically and when it comes to restaurant or bar help, models or aspiring hot looking actresses, once thriving on the generosity of their friends in the scene for hookups— such as hosting events, marketing brands on luxury car and boat shows or modeling—are now hunting for work, pushing those with less striking genetic gifts into unemployment. A disturbing trend, but one that indicates that we’re not out of the woods by any means.

The global economy is going through traumatic upheavals and all the traditional ways of measuring the state of the economy seem to be about as useful as a bottle of suntan lotion in a blizzard. The foregoing indicators maybe unusual, but can say a lot about where the economy is heading.