Gold, Silver and a History of Control

It has been done time and again when governments are in debt, print lots of money and people go out of money into gold. They confiscate it! 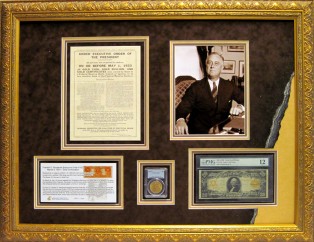 Those of you who have had the pleasure to visit China  a bit beyond the level of the Great Wall and the Clay Army may understand why I use the Chinese example to bring a little understanding across of why I don’t offer unsolicited comments any more to discussions and conversations on parties. It is a bit about generic human behavior

It apparently has now come to attention of the early adopters among us that holding gold and silver instead of dollars, may be a risky proposition unless it is stored safely away from the hands of the government.
For many it just now becomes clear that even in the good old USA, it was only 77 years ago, on April 5th of 1933, that President Roosevelt declared a banking “holiday” and then issued the order to confiscate gold with Executive ORDER 6102.

Literally the Executive Order said: ”That the continued private hoarding of gold and silver by subjects of the United States poses a grave threat to the peace, equal justice, and well-being of the United States; and that appropriate measures must be taken immediately to protect the interests of our people.

Therefore, I hereby proclaim that such gold and silver holdings are prohibited, and that all such coin, bullion or other possessions of gold and silver be tendered within fourteen days to agents of the Government of the United States for compensation at the official price, in the legal tender of the Government (The US Dollar). All safe deposit boxes in banks or financial institutions have been sealed, pending action in the due course of the law.”

Make no mistake, this Law is still on the Books TODAY!!  The difference between then and now is that in 1933 there were 51 days between March 9 when the Act was approved by the Senate and the date Americans had to bring in their precious metals, which was May 1. A lot of gold and silver left the country in those 51 days. With the law on the books, this can now be done overnight. In view of this real possibility I find it discouraging to learn more each day that America is an alarmingly divided and confused society; much as was the case with China in August 1945 after Japan had occupied much of the nation for almost 9 years.

Roosevelt’s Act 12 years earlier had set an example and a path to follow for China’s strong man Chiang Kai-shek in 1945. Chiang knew that his days were numbered on the mainland and Communism was going to get its shot at historic significance even though historians think that Chiang had a golden opportunity to pull his country together, immediately after Japan declared defeat on accord of two bombs on Hiroshima and Nagasaki. Instead, three years later, 1948, the cost of living was skyrocketing and at three separate times he betrayed the value of the national currency.

The first time was when he called in all the gold in the country in exchange for an issue of paper money, promising that the government would back it. Within a few months it was valueless.

Next he called in all the U.S. dollars with which the economy was now flooded, the result of generous UNRRA and Red Cross money and all kinds of American war-aid monies. Once again Chiang issued paper money as security. Again it was only a matter of months before this money, too, was almost valueless.

Then a third time he put the skids under the economy and compelled the poor people of China to surrender all silver money, their last faint hope of any kind of security. Again he issued soon-to-be-useless paper money.

By 1948 the streets were actually littered with useless money being trampled underfoot and one could see destitute beggars looking, but not bothering to pick it up. I remember a similar situation in New York several years ago when I got angry with a yuppy stockbroker who was emptying the change from his pocket into a garbage bin.

By 1948, just after the communist moved into Shanghai, Chiang Kai-shek and his government had gone happily off to Formosa (which later became Taiwan) with all of China’s gold and silver and U.S. dollars, and settled like a plague of locusts on that incredibly beautiful island that had been wrestled from the Japanese at the cost of many American lives. Yet he had the blessing of all the Western governments, and was even for decades the official representation of China in the United Nations.

The sheer necessity to protect wealth from a declining dollar has moved a lot of wealth into gold, silver and other precious metals (titanium has a good future as well). Speculators have seen gold prices go up 100% and more, silver has tripled and is slated to triple again in 2011 and all the while the government continues to print money.

It is amazing how many people I meet at parties, good people, intelligent and educated people, people who traveled the world (but apparently with blinders) who are convinced that History WILL NOT Repeat Itself this time. In a timespan of 70 years we have supposedly changed so much that disastrous situations like the ones in the 20th Century cannot be repeated?

2008 Proved that Greed is a big as it ever was, and it is probably not going to change anytime soon. What however did change is the power of exposure via a Connectivity Technology that sheds a light on the truth as measured by the consequences. And that brings me to the next topic of conversation on parties these days: For or against Net Neutrality. This topic amazes me as most of the arguments reveal that the contributors know little to nothing about the issue. How do I know? I ask them about their opinion on the Last Mile Infrastructure and only see ” the eyes of deers caught in the headlights of an oncoming tractor trailer. I am not going to explain the definition of Net Neutrality; Wikipedia and other sources do that more than adequate (http://en.wikipedia.org/wiki/Network_neutrality)

The Internet is our last defense against the Bernie Madoff’s of this world; it is our last line of defense against oppressive governments (as currently is unfolding in Myanmar (Burma) and tyrants. It lets us choose our “pals” and connect with our interests. Yet whole tribes scream at the top of their lungs that WikiLeaks should be outlawed and hung on the highest tree in the early morning sun.

So for all of you who have been asking my position on “Net Neutrality”, for Heaven’s Sake let freedom rule. Keep the state out of the last vestige of democracy that still may show us a clear direction to a better world.