Google is at it again, but now it is different 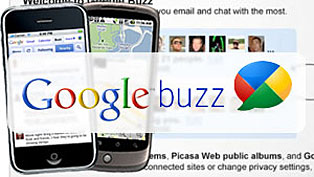 Google has finally learned that you need to do what you do best, better than anyone. And for Google that is organizing Web content by relevancy. After several attempts to enter the social media market and having openly admitted that social giants like Facebook and Twitter are in a position to become serious competitors for the world’s advertising budgets, Google has finally figured that their advantage lies in apply it’s organizational prowess to social media, which is probably the most disorganized segment of the current Web.

Google Buzz is its most ambitious attempt to do just that by marrying the Gmail Web interface with status updates and media-sharing technology in an attempt to convince the social media addicts of the world to spend more time on Google’s sites than on competitors Facebook or Twitter; and of course generating valuable data in the process.

Why they couldn’t be a bit more creative than coming up with the term Google Buzz (Yahoo Buzz anyone??) is beyond me, unless the nerds are freshly out of ideas, but using their knowledge and experience to organize the social information on the Web is a Google-scale problem. Facebook alone generates 39 billion page views a month, underlining that an astounding amount of social-media content is produced every day. Add that to a handful of other SMS giants such as Twitter, Flickr, YouTube, and personal blogs, and Google’s initial mission statement that it could one day index and organize the entire Internet has been shaken to the core by this explosion in Web content.

So the prevalent thought is that somebody has to try and do it, and that might as well be Google, arguably the only global web operation that could even dare to think that it can be done. The company’s credo is now: “We can’t achieve Google’s mission unless we solve these parts of that problem.”

However, they see not only an opportunity to unify the social Web and make things easier for users, but a chance to erode Facebook’s advantage in the mountains of user data it has amassed behind closed walls that Google–and Google’s advertisers–can’t see. The only way they’ll be able to do that is by creating a system that is as compelling and easy to use as Facebook.
And Google is attempting to do this by taking Gmail, one of its more popular products, and integrating Buzz directly into the Gmail interface. Users can link their Twitter, Flickr, Picasa, and Google Reader accounts to their Buzz streams to see information produced by friends on those networks, as well as updates posted directly to the Buzz stream.

The real big step forward may be Google’s ambition to put Buzz on the road; the mobile future of information dispensing that allows social media to be combined with location, so phone users ill have a wealth of data about what’s happening around them and get in on the location-aware services bandwagon, provided some privacy issues are cleared in advance.
Google has hired everal veterans of the social Web to underline how important it is for the company to get a solid social media strategy. The new team and Google’s executives are promising a lot more to come in addition to services like Buzz over the course of 2010 in the hope that it will erase the memories of Google spotted past as a social-media operator.

The biggest threat to Google’s ambitions however will depend on the willingness of the users to give more personal information on preferences and predictability of Internet use, than Google already has backed up in its vaults.