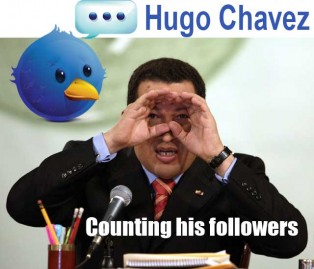 Based on the “Tools of Terror” to “a weapon that also needs to be used by the revolution” turn of events in Hugo Chavez’s opinion about Twitter and the subsequent hiring of 200 twitter staffers outputting 50,000 messages so far got me to think on how we can create instantaneous 100,000 or so jobs.

We got 545 capitol reps and if each of them would take twitter as serious as Hugo Chavez, the country would be a heck of a lot better of.

and all of this would then create another million of so jobs at all the media outlets to keep up with the “wielding” through the gossip from DC.

Now isn’t that a plan? Seems to work for Chavez. Wait until he gets onto Facebook. He’ll have to hire about 500 people…