As both investors and consumers are slowly losing confidence in recovery, Greece becomes a dirty word 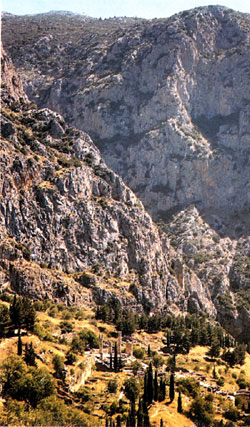 The Oracle at Delphi stays quiet

Don’t let me laugh too loud about Greece being the reason for the stock market to go south this afternoon. We’ve talked about it again and again. The size of the Greek economy does not warrant this panic. What’s at the base of the mini crash is investors having no clue about what they’re doing and follow the herd by copying one or two of the cattle nervously sniffing the air for bad news to come.

And soon the entire herd is nervously sniffing and making sounds of distress, like the athetes in the starting blocks for the hundred meter dash. The pistol goes in the air and the first one starts coming out of the block, no longer able to retain his calm. From there on it’s a pandemonium. No stopping. Just chaos.

Greece is not worth it. Oh it’s beautiful and ancient and it has the most beautiful islands in the Mediterranean but economically it has little to offer beyond tourism.  Germany can, if it wants to, carry the entire Aegean Archipelago on its back and install frugality and a solid economy inside of 3 years.

Located about one hundred miles northwest of Athens is the ancient site of the panhellenic sanctuary of Delphi.
The complex of buildings, which includes the Temple of Apollo where sat the famous oracle, the sacred Corycian Cave, and the Castalian Spring, is nestled in the forested slopes and rocky crags on the south side of the sacred mountain (cf. Mountains and the Sacred) called Parnassus. The site had been sacred since at least the Bronze Age.
According to legend, the shrine was originally guarded by the she-dragon Pytho. She was killed by Apollo who then took over the oracle. In antiquity, Delphi was regarded as the centre of the world. If only she could talk some sense into the market today.

If the stock market would consider Greece as the lynch pin for the next recessionary leg to go down, it’s only because it proves that Wall Street and Washington and the press have been lying about recovery. It looks like the Second Leg Down may be starting.

But take my word for it, on the short the dollar will be strengthening and a corresponding fire sale on just about everything else will take place: stocks, bonds, real estate, many commodities.

If you still have some cash sitting around, or gold even better, now is the time to start looking for deals. From Craigslist to eBay and from Auction houses to classifieds; it’s dealmaking time.