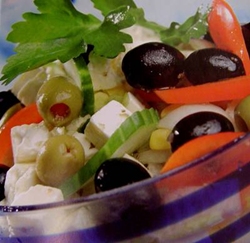 The Greek salad is commonly served with the traditional Greek meal. It is especially popular during the summer months, is light, refreshing, and easy to make. True Greek salad is essentially a tomato salad made of sliced or chopped tomatoes with a few slices of cucumber, red onion, and feta cheese, seasoned with salt, black pepper, oregano, and basil and dressed with olive oil. Common additions include bell peppers, capers, anchovies, sardines and kalamata olives. Lettuce and vinegar are also used but not the main ingredient.

A lettuce salad is a distinct salad, also popular, especially in the autumn and spring, consisting of finely sliced lettuce, scallions, and fresh dill, and dressed with salt, black pepper, olive oil and red wine vinegar or lemon juice. The term “Greek salad” is also used in the United States to a lettuce salad with Greek-inspired ingredients, dressed with vinegar and oil. Lettuce, tomatoes, feta, and olives are the most standard elements in an American “Greek” salad, but cucumbers, bell peppers, onions, radishes, dolmades, anchovies/sardines and pickled hot peppers are common.

Directions:
Whisk the olive oil, lemon juice, garlic, vinegar, oregano and dill weed together until blended. Season to taste with salt and freshly ground black pepper. This can be prepared ahead of time. Simply leave at room temperature for up to three hours and whisk again before using.

Combine the tomatoes, cucumber, onion, bell pepper, olives in a bowl. Toss with dressing and sprinkle with cheese to serve.