Greenspan Barks Back at Congress

Former Fed Chairman Greenspan tells Congress about its policy failures, while masking his own. 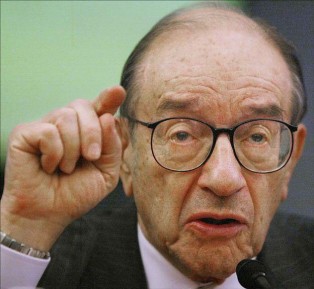 Greenspan has reached the age of Damn the Torpedoes

Why is Congress not shouting now that everyone should own a home?  When Freddie and Fannie get finished with the homes that have yet to hit the foreclosure market, maybe Congress will start giving them away.

When we think of the Fed and the Treasury we think of fat cats in back rooms making deals that you and I pay for.  Alan Greenspan was chairman of the Fed for many years.  As Congress continues to try and find who was at fault for the financial mess we got in, I found it interesting when this week Greenspan testified before Congress giving his views on the matter.

Now I was never a big fan of Greenspan.  I always viewed him as an opportunist, an insider who always had the political connections to get him the positions he wanted.  Remember during the hey day of the the hot markets, when Greenspan spoke, the entire world listened.  I was always amazed at his lingo and use of terms that most of the time seemed to be from another planet.  After listening to his statements one would need a little time to digest it and then try and figure out exactly what he meant.  Most of the time his statements were left to the reader’s own interpretation and could easily be discarded if needed.

Greenspan told Congress that he was only right seventy percent of the time and wrong thirty percent of the time.  Now that’s a statement I understand even though the percentages may be a little random.  I take my hat off to Mr. Greenspan, I think he believed he absolutely told the truth on being wrong on occasion, which we would have never heard when he was Fed chairman.  When they pressured him to explain why we fell into this global financial crisis and huge recession, near depression at times, he attempted to tell the truth again, but only got as far as saying that blame is to be laid on Congress itself.

Even though he quickly side-stepped the Fed’s role in allowing Derivatives and Credit Default Swaps, (you remember the packaging of sub prime mortgages into globally traded derivatives, then re-insured for potential loss on every level of trading) without even monitoring the Wall Street banks’ or insurance companies’ exposure, I still thought: “now that’s a twist” and once again I was impressed with his answer.  He told Congress that it was their push for everyone to own a home.  Their push for sub prime lending and how lenders were to make housing affordable to everyone.

I can tell you that during the heat of the market this is exactly what was going on.  The rules were being changed all the time; rules that were making it easier and easier for someone to purchase a home.  As we know there were folks buying homes that were not required to submit proof they could afford one. The banks had an “open door to the vault” policy, life was good and everyone was cashing in, especially the lenders and derivatives traders.  Today the good times have come tumbling down on the system and now everyone is looking for someone to blame it on.  I think we should strongly consider the old saying that when you point the finger at someone you must remember there are three fingers pointing right back at you.  I think Congress should think about that.  Today the majority of homeowners with mortgages are either underwater or on the verge of going.  We are loosing value now daily. Once the underwater properties have been auctioned off, lenders will take the difference between the auction result and the outstanding balance of the mortgage and try to collect, which will push personal bankruptcies to an all time high for several years to come.

At his age Mr. Greenspan can safely afford to have the Admiral Dewey mindset: Damn the Torpedoes. Full Speed Ahead, because no action from government is really going to hurt his ego anymore.  I only wish he had told them this a number of years ago.