Handmade Spyker Convertible is the Bomb

Spyker Cars became better known after it successfully negotiated ownership of Saab with GM. Now people are becoming aware of the beautiful sport cars they handcraft. 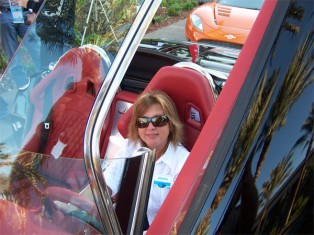 After writing a couple of months ago about Dutch Sportscar maker Spyker concluding the take over of Saab from General Motors, I have been attentive to their aspirations and last week Sunday we had the pleasure of speaking with Spyker’s head of the Americas Operation, Carsten Preisz who had 4 of their beautiful speed machines at the 2010 Concours d’Elegance.

Two Dutch brothers Spijker started building coaches, carriages and cars around 1895 and one of their major milestones came when they were commissioned to build the Gouden Koets (Golden Carriage) for the Royal Dutch family in 1897. For about 10 years after that momentous event,  the two brothers Spijker build sports cars with Mercedes and Maybach engines and entered major global rallies and races, but the tragic death of one of the two Spijker brothers in 1907 put the fledgling company into a tailspin and in spite of several diversions into aeronautics and truck directions, the company closed doors in the late 1920’s. However the name lived on because of the quality that the shortlived company had put on the roads. The six cylinder Spyker 60 HP, a racer, was the world’s first ever four-wheel drive car with a single engine and four-wheel brakes, which received much acclaim in the Peking to Paris Race in those years.

The brandname’s 1999 reincarnation company, builds high end customer detailed on demand sports cars that deliver speed, maneuverability and personal finishing touches for the discriminating connoisseur and sports car enthusiast. Of course at a $210,000 – $250,000 price tag, the Audi V8 and new V12 powered sports car competes in the high end brands like Maserati, Ferrari, Iso Rivolta, Viper and Bugatti field, but the company’s production is adjusted to demand. They only built 43 units in economically depressed 2009, but 2010 should see double that number.

Having had the opportunity to compare Spyker’s models directly with its high end competitors on display at the 2010 Amelia Island Concours d”Elégance I must admit that these cars certainly make a statement to their advantage, if you have a spare quarter of a million dollars laying around to purchase a new automobile why would you want a Maserati, Porsche or Ferrari in a similar price range. They are dime a dozen on South Beach. Jennifer Lopez did get a Spyker and the car looks great on her.