Hang On, The Fed is Taking us for Another Ride

I think this is going to benefit no one but the inner circle on Wall Street. Banks have no incentives to lend to anyone. 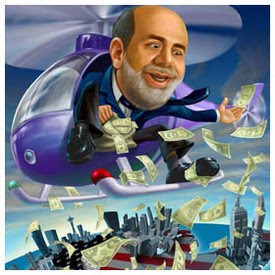 OK, the elections are finally over, thank goodness. I really don’t know how much more we could have taken. The Republicans have taken over the House and there is a thin Democrat majority in the Senate. So what will the Republicans do now that the control is in their corner? Perhaps the larger question is what will Obama do now that he is going to be forced to at least sit and talk with the “other side”? Oh well, time will tell.

About the new ride the Fed is gearing up for… it seems they have come up with a new weapon to get the economy going, now that sounds like good news. So what’s the plan?

They are going to buy $500 billion in securities. They will do this in $100 billion lots monthly, buying them from banks. The idea is the banks will have the cash to loan consumers. Hold on just a minute, have the banks not been borrowing money from the Fed at about 1/4% interest (almost free money), then buying treasure securities at at return of about 3.5%? Let’s see, that would be more than a 3% return, with no risk.

Ok, back to the plan. This sounds great except for one thing, they won’t loan it unless they are forced to. The Fed needs to put a policy in place, just as they did in Denmark, that simply states any funds received from them, a certain percentage must go out to consumers and business loans, or they will pay a hefty higher percentage. Once again I think this is going to benefit no one but the inner circle on Wall Street. Banks have no incentives to lend, to anyone, for any reason. They are earning a healthy profit for doing absolutely nothing. So businesses continue to lay off and close and foreclosures continue to rise, all the while unemployment is going up daily.

Now I’m no genius and I admit it. I do remember my grandmother telling me there were two things in life you couldn’t do. Borrow yourself out of debt or drink yourself sober. I thought about her when I read this new Fed plan, are we not trying to do just that, borrow ourselves out of debt? I just thought things were interesting as we watched history being made. I’m not so sure that we are just beginning to see what interesting really looks like in the next two years. The good news is, we still have front row seats. See ya during the cartoon’s.