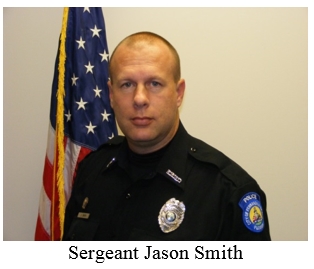 Jason Smith, a ten year veteran of the Fernandina Beach Police Department, has been selected to be the next Police Sergeant after successfully completing the recent competitive promotional process.

Sergeant Smith has twice been recognized as the Police Officer of the Year by the Fernandina Beach Police Department based on his volume of work, initiative and dedication. He received the annual MADD Outstanding Performance Award in 2007, 2008, 2009, and 2010 given by the Northeast Florida MADD organization for his continuing efforts to reduce DUI traffic offenses. He has served as a Field Training Officer and Drug Recognition Expert.

Sergeant Smith is an active mentor in the Take Stock in Children program in Nassau County. He is also an active instructor for NACDAC, teaching Responsible Alcoholic Beverage Training curriculum on a quarterly basis.