How Safe are our Holiday Packages

In the News, Latest News, News

Shipping gifts is a big pain around the Holidays, especially if you don't know which carrier takes best care of your precious package. Here is what a survey taught us. 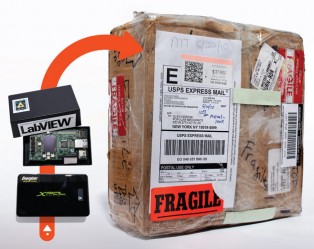 How safe is it to ship your gifts?

Only nerds have the time and tenacity to design a methodology for writing a complicated survey, to find out which carrier would be best to ship your valued Christmas packages. But as we get closer to the Holidays it becomes imperative to know where our best chances lie, having our gifts arrive safely and in one piece.

So the guys and girls at Popular Mechanics mailed a bunch of sensors on an epic journey to find out which shipping company is the most careful with your packages.

They mapped out a tour of the United States, starting and ending at Popular Mechanics’s home office in New York City, with stops at their West Coast headquarters in Santa Monica, Calif., and National Instruments’ in Austin, Texas. At each stop, the data was uploaded from a micro SD card, the battery recharged and the package sent on its way. The parcel was shipped a dozen times as there was neither the time nor the budget to make the hundreds of trips necessary for real statistical significance, yet even a modest experiment gathers enough data to draw broad conclusions.  They also changed up a few variables to see if the treatment of the package changed as well. For example was overnight shipping more or less violent than three-day? Did marking the package “Fragile” or “This Side Up” ensure a more careful treatment?

After establishing the baseline g-force readings by kicking and dropping the package extensively they even ran down the stairs with it in a backpack.

They only used UPS, Fedex and USPS and here’s what they found.

• USPS has the gentlest touch, with a per-trip average of 0.5 acceleration spikes over 6 g’s. FedEx and UPS logged an average of three and two big drops per trip, respectively

• yet USPS also flipped over its Express Mail packages an awful lot, averaging 12.5 position changes per trip. Meanwhile, FedEx averaged seven position changes, and UPS had an average of four.

• All three carriers did a good job at maintaining a stable temperature, but FedEx nabbed the top rating, with an average change of only 26.01 degrees, compared with 26.8 degrees for UPS and almost 32 degrees for the USPS. But the maximum temperatures their package experienced were within 2 degrees, and at no time did a temperature register above 80 degrees or below 47 degrees.

The researchers were disheartened to find that their package received more abuse when marked “Fragile” or “This Side Up.” The carriers flipped the package more, and it registered above-average acceleration spikes during trips for which we requested careful treatment.

In the admittedly modest experiment —12 trips, three carriers, three cities— FedEx delivered the most big bumps, with an average of three acceleration spikes over 6 g’s (equivalent to a 2.5-foot drop) per trip. The USPS was the gentlest yet also the most active handler, with an average 12.5 position changes per trip. UPS was tops at keeping the package upright. 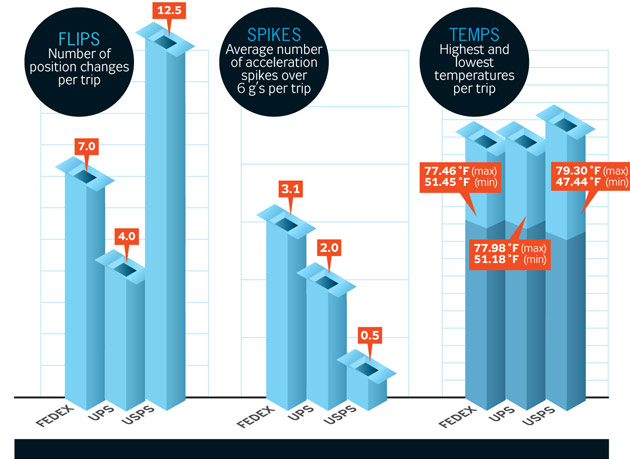 A bright finding was the reliability of the service. In fact, several of the three-day deliveries arrived early. Quick delivery is what you expect—and pay for—but is gentle treatment as well too much to ask for? One comment to the story in Popular Mechanics was “Shipping overnight is expensive. For the price you pay, I feel like they should be rushing the package on a silver platter in a little butler’s tuxedo.” Thanks to the test, there is now an answer to that expectation: Dream on.