As the Dutch National Soccer Team qualifies as first team for the finals in the World Cup, a sixty year old soccer doodle becomes world famous. Hup Holland Hup, here is your chance to sing it. 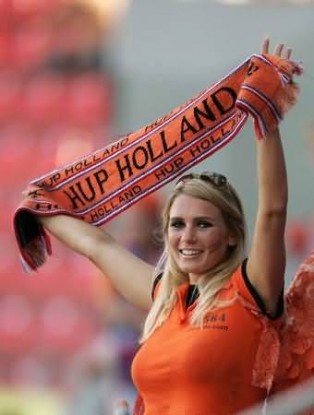 Hup Holland Hup is trending as the Dutch National Soccer team made it into the world soccer finals with a 3-2 win over Uruguay this afternoon. Just to let you know, I’m not the biggest soccer fan around. I once was in 1974 when the Dutch soccer team made it to the finals in Munich Germany against host Germany.

The Dutch in those days had two of the world’s leading soccer teams: Ajax Amsterdam and Feyenoord Rotterdam were two major rivals on the national level and pushed each other beyond incredible on the international level. It was said (and often witnessed) that Ajax under its captain, Amsterdam born Johan Cruyff, could score at any point they wanted in a game. You could often sense the moment that they decided to outclass their opponents, when Johan Cruyff with some brilliant moves outplayed the complete opponents defense and passed to a team mate or scored himself. They usually kept it up for about 10 minutes and scored 2 or 3 times for a comfortable lead.

In the 1974 world cup finals they had the same tactics in mind. The Dutch won the toss kick and without a German ever touching the ball they moved in the German’s 16 meter line where only a big foul could stop the Dutch from scoring in the first minute. Penalty kicker Johan Neeskens made it 1-0 and from that point on the Dutch forgot to play football. Not that the Germans got a lot of scoring chances in the remaining 88 minutes, but in the end they only needed two and they  scored both times which took away the biggest chance the Dutch ever had to become World Champions.

I was there in Munich right on field level and I never forgave them. Everyone knew that the Dutch had the best team in the world, but they often played with that sense of over-confidence (arrogance) that made them forget to add effort to talent. They proved it again in 1978 in the finals against Argentine. Again they ran short. This coming Sunday it’s 32 years later and a complete new generation of players, yet our webmaster who watches the games religiously, tells me that he still sees the arrogance creep up on occasion. We’ll know this coming Sunday as it may become a repetition of that fateful day in July 1974 when I postponed my vacation to attend the finals against Germany (it was still West Germany in those days).

Hup Holland Hup is a soccer song that dates back to the 1950s when Holland had no professional soccer teams yet, but its national amateur team was feared across Europe. The song is only a one verse to be repeated over and over again as it pleas with the Dutch soccer players not to embarrass the Dutch Lion by turning arrogant or over confident again. 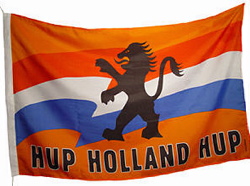 The Dutch Red-White and Blue with some Orange mixed in

The Dutch Royal Family originated from Orange-Nassau County in today’s Germany and in their family’s Coat of Arms the color Orange was dominant as was the Lion. The oldest coat dates back to the 13th century. As in the US, the Dutch prominently feature red, white and blue in their flag (oranje, blanje bleu). If you’re interested in how this came about, try this website.

For now I’m just happy they made it this far. Maybe I will memorize the players’ names as well and forget those that “left the Dutch lion standing forlorn in his wife beater shirt”, back in 1974.