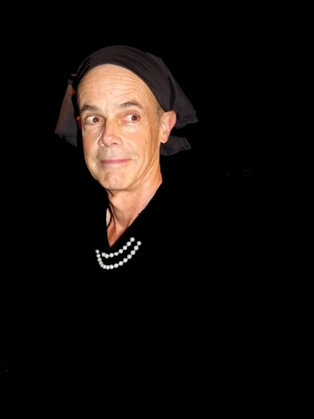 Fernandina Little Theatre stages regional premiere of Pulitzer and Tony-Award Winner I Am My Own Wife.

That question is at the heart of the riveting Pulitzer and Tony-awarding winning solo show, I Am My Own Wife which will have its regional premiere starting November 15 at the Fernandina Little Theatre.

This is the first production of FLT’s 23rd season and the latest regional premiere at the theatre, which has staged such edgy, award-winning plays as Red, Other Desert Cities and I Have Before Me a Remarkable Document Given to Me by a Young Lady from Rwanda.

Unique and breathtaking, I Am My Own Wife focuses on the extraordinarily complex life and times of Charlotte Von Mahlsdorf, who became an almost mythic figure as the transvestite who, through turbulent decades, ran Berlin’s famous Grunderzeit Museum, still a tourist destination today. Within the museum: the last surviving Weimar cabaret in Eastern Germany, a model for the play and movie, Cabaret, which celebrated diversity despite the fearsome Communist secret police.

Like a mystery thriller, the play dramatizes the search by Pulitzer and Tony award winning playwright Doug Wright for the real Charlotte. Did she have a heart of gold, or a heart of darkness? Along the way, Wright discovers much about himself… and humanity.

“From Beach Street to Berlin, follow in the footsteps of a courageous survivor in a show that celebrates the bravery of self realization within the boundaries of social and political oppression,” notes veteran director Ron Kurtz, who has previously directed many local productions including The Glass Menagerie, Doubt and Rwanda, and is also well-known for his signature collaboration with actress Sinda Nichols including The Belle of Amherst and The Lady with All the Answers.

Kurtz adds that, “This isn’t a show you will see anywhere else in our area. It even has innovative visual and musical effects. And seldom does a play offer the opportunity to challenge both a director and actor to this degree.”

The show is performed by a sole actor, Frank O’Donnell, who plays about three dozen different roles, ranging from Charlotte and the playwright to Nazi thugs and a wannabe super-model.

“It’s not only a monumental challenge but a great privilege to tackle this award-winning script,” notes O’Donnell, who previously worked with Kurtz on Rwanda, and has appeared in other FLT productions including Other Desert Cities, Much Ado About Nothing, and The Heiress.

Tickets are $16.50 for all performances except the Tuesday performance on November 18, when tickets are only $14. Tickets may be purchased in advance at The UPS Store, located in the Fernandina Beach Publix shopping center.

FLT is an intimate performance space, and patrons are encouraged to purchase tickets in advance to guarantee seating availability. The production includes adult themes. More information on FLT is available at www.ameliaflt.org.