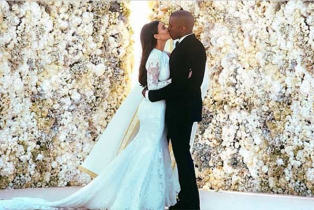 Idiocracy is the sum of so many things that are wrong with America these days. While dictionaries and thesauruses are still struggling with a clear definition of the term that was magnified by the 2006 movie of the same name, the irony of the satirical flick must have escaped from the feeble minds of the KK Klan (Kanye and Kim Kardashian) and a couple of million Instagrammers, who expressed a liking for their atrocious wedding picture in front of a wall of flowers.

But of course as with everything that borders on insanity, this is not the end of the story, but merely the beginning.
Normally I just ignore anything that involves Paris Hilton’s trash successor Kim Kardashian, because trash is just that to me: something to be discarded as not useful or usable. But since I cannot find anything worth my attention on 600 channels of Prime Time TV this summer, I get bombarded by images of the proof that if you put nipples on 10 pounds of lard, the world stops turning, the newsmedia become mindless entertainment and every talentless hick without anything to show for becomes a celebrity.

Just a shame that this time it involves Annie Leibowitz, the artist celebrity photographer of a generation, with a track record of imagery excellence since before this world turned into an idiocracy.

She ruined KK’s honeymoon, says rapper husband West….because they had to spend four days fixing a hideous floral wall wedding picture instead of enjoying the beaches and high life afforded to them by mindless millions of fans. Kimmie apparently was too exhausted from working on correcting the photo to perform her wifey duties, which in turn pissed the other K off. Turns out that Leibowitz decided in good taste, that even though she accepted the gig to shoot the wedding, she refused to take this particular picture, which apparently was then taken by someone in the wedding party who had no idea about lighting, composition and artistry. Result, the couple spend 4 days trying to make sense of Photoshop to improve the disaster.

Now I’m not really surprised by Mr. West continuing poor attitude but I am shocked that Miss Leibovitz said yes to shooting one of the trashiest couples walking the planet these days. It’s almost as if she was hired to give real world validity to this extravaganza of futility.

I do wonder why these two still exist in the world of media and find it sad that we lose good people in plane crashes or disappearances, quickly forgotten to all but their direct relatives, yet these two morons who should spend four days fixing their IQ’s, continue to exist on magazine covers and homepages.

Of course I’m fighting a lost battle against Idiocracy, as witnessed by 2 million likes and 35,000 comments on another Internet waste called Instagram.

Here are two photographs by Annie Leibowitz, who I consider the best artistry photography alive today. Because of her talent the KK Klan made it to the cover of VOGUE and that saddens me to no end. 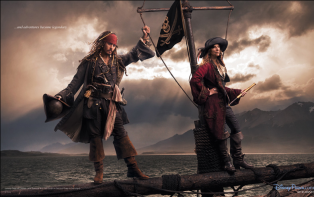 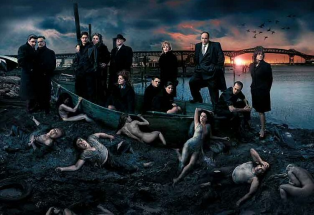