If You Build It, They Will Come. Well…Maybe.

China's problem is that the growth in fixed investment has risen faster than GDP creating too much debt to fund those investments. 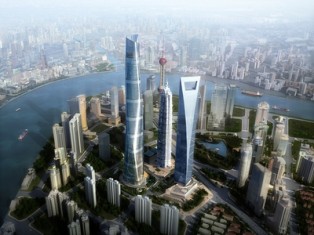 Not only too much fixed investment, but also too status ambitious

Build it and they will come, seems to be an appropriate description of China’s economic growth model. Just one look at Shanghai’s waterfront or train station is enough to leave visitors believing China’s infrastructure can rival anything in the world.
Consider this 2011 photo of downtown Shanghai along the Huangpu River. Twenty-one years ago none of this was here. Now these buildings are among the world’s tallest skyscrapers.

A significant amount of China’s growth over the past 20 years has come from what’s called “fixed investment” as opposed to consumption spending. Fixed investment includes tangible things like roads, bridges, trains, buildings, and machinery and accounted for 46% of China’s GDP in 2010, according to the Financial Times. The June 30 launch of the Beijing to Shanghai high-speed train is a good example of fixed investment. It cost $33 billion to build, reaches a top speed of about 200 mph, and connects the two major cities in less than five hours, according to The Vancouver Sun.

Fixed investment is good from the standpoint that it equips a country with the tools and resources needed to grow and be productive. However, too much fixed investment can lead to overcapacity and strained budgets.
Rather than continuing to rely on building and infrastructure for its growth, the Chinese government has developed a plan to re-balance its economy from investment and manufacturing towards consumer consumption and services, according to the Financial Times.

Ironically, this would put China more in line with the U.S., where consumer spending accounts for about 70% of demand in our economy, according to The Wall Street Journal. In China, the comparable private consumption number is 34%, according to the Financial Times.

One of the knocks on China is that the growth in fixed investment has risen faster than GDP and this could cause problems with too much capacity and too much debt to fund those investments. Should China falter in its effort to re-balance its economy, it could lead to domestic problems that ripple out to the rest of the world.

There’s an old saying that when the U.S. sneezes, the rest of the world catches a cold. Given China’s strong growth and massive size, we should be concerned about China sneezing, too. How they manage the re-balancing of their economy over the next few years bears close attention.  because if it does, a polite “Gesundheit” will not save us.